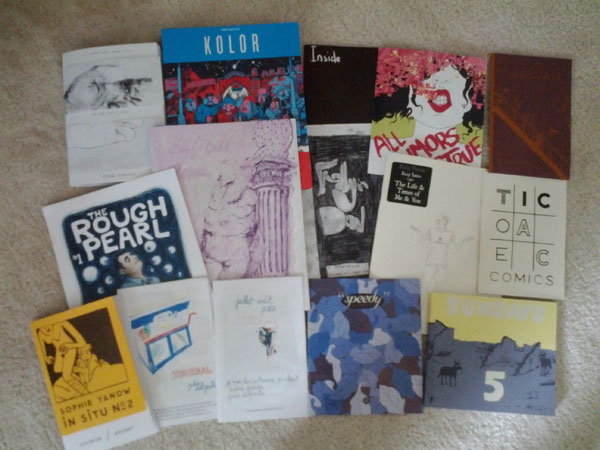 Trades and purchases from the show.

Either attendance was down or efficiency was up this year. I got to the Armory before noon on Sunday and didn’t have to wait in line at all. There wasn’t a single person buying a ticket at any of the three registers at the entrance. Based on comments from a few people during the day, I’m guess attendance was down (despite MoCCA officially stating the opposite). All told I spent about 5 hours at the show, in the main area. I didn’t end up attending any of the panels (I got distracted and didn’t make it to the one on e-comics publishing that I wanted to attend) or even leave to eat. I just walked around, looked at comics, and talked to people.

In the end the festival was way more successful to me as a social event than for the comics themselves. I gave or traded away all the comics I’d brought with me, and ended up buying only a very few comics (I think I actually paid for 6 comics (2 books, 4 minis) from 4 different tables). I didn’t even spend all the cash I’d brought as my buying allowance for the day. It was the most active I’ve ever been trading comics, which was nice. I think I’m happy enough with my two latest issues that I feel comfortable in asking people to trade. I haven’t actually read everything yet, so most of my comments below are brief/vague.

I also felt like I hit some kind of new level in the socializing department this year. I made it a point to try to talk to people I ran into, and I had a few people I knew were in attendance that I wanted to chat with. Of course, I ran into Marc Sobel at the first table I visited (Fantagraphics in this case, who are publishing Marc’s book on Love & Rockets). I think this is the third show in a row that I’ve run into Marc this way. Ended up spending a lot of time wandering around with him. He’s got different tastes than me, in many respects, so I liked having the alternate perspective on some of the comics we saw. He was also nice enough to give me a comic that was one of the best finds I came home with, a 1997 Xeric grant funded book by Warren Craghead called Speedy. 15 years ago Warren’s work looks pretty different on the surface but when you start reading it, you can see many of his ongoing themes and style coming through.

I was really excited to get a copy of Secret Prison #666 from Pat Aulisio. I’m in the issue, in collaboration with Warren, so there was that extra thrill of seeing my work in print (not something I had printed myself). Our piece looks great. Not sure where or if you can get copies of the issue if you missed it, but I’ll probably be putting the comic up here at some point.

The international contingent usually has interesting work at MoCCA, this year there were a number of Finnish and Swedish artists, maybe some other Scandinavians . I didn’t end up seeing anything too interesting there (except a few comics I already have from Allan Haverholm). I looked through the 2012 edition of the Finnish Comics Annual (I got the 2011 edition at last year’s MoCCA), but I ended up getting my Scandinavian dose of comics from Fantagraphics’ Kolor Klimax anthology, which I ended up buying when I feel in love with this a spread by Jenni Rope. 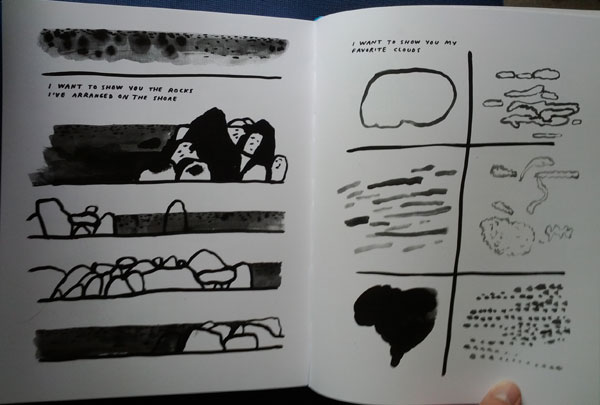 Crappy picture does not do it justice. Lovely.

Quebecois publisher La Pasteque was also in attendance, I skimmed through most of the many books they had at their table hoping to find a French language gem, but I think maybe their editorial style is not really to my tastes, alas. I also had a conversation with Stephen Robson of Fanfare with the sad but understandable realization that there won’t be any more Times of Botchan volumes forthcoming. On the positive side they showed me the latest Taniguchi book in French, Furari, which was described as a historical Walking Man.

Found the Domino Books table to say hi to Austin. He gave me a copy of his new mini (not really mini, it’s letter size) “Freddy’s Dead” which I think is going to be part of his next book of stories. It’s a more representational and less multi-media work (all pencil I believe) than The Disgusting Room, but there’s no mistaking it’s an Austin English comic. Also at the table Molly Colleen O’Connell with her new book Difficult Loves, which I haven’t had a chance to read yet, though the cover has a figure that looks kind of Venus of Willendorf-esque. My second time around I also got to meet and talk for awhie with Sakura Maku (who did Dark Tomato #1 with Domino).

At Matt Madden and Jessica Abel’s table (the latter of whom has awesome green glasses) I got a copy of the “Tic Tac Toe” minicomic Matt put together. It’s all tic tac toe comics from different people including Matt and Tom Hart, as well the one I did with Marlon Deason. At the Pantheon table they had a preview of Chris Ware’s Building Stories in the form of a long and thin pamphlet. I’m really looking forward to this one, as I’ve found the Building Stories chapters more to my taste than the Rusty Brown chapters. Curious to see how the life-size baby from Kramers Ergot 7 will fit into (what I assume is) a smaller book. The preview itself is sort of a day in the life excerpt, though it jumps around in time a bit. Abrams also had a 64 page preview (about a third of the total) of Frank M Young and David Lasky’s Carter Family book. Marc and I chatted with Kevin Mutch for a little while and he gave me a preview of his (still in pencils) follow-up to Fantastic Life.

Picked up the new Sundays #5 anthology primarily because it had a piece by Warren in it. It’s got a silk screened cover which I found tactily unpleasant while reading. Mostly not to my taste though some interesting pieces by Matt Wiegle (a landscape comic), Conor Stechschulte (who I missed at the Domino table), and Damien Jay (though I found his hard to read, whether that is purposeful is not totally clear). Julie Delporte’s contribution is one of her Letters in the Form of a Book (I have one of them and it is lovely), which unfortunately loses a lot when printed in black and white. Julie’s work is really vibrant in color and it’s a shame that all the English anthology contributions I’ve seen from her are in black and white (including the “Cartoon Crier” that was being given away at the show).

Julie was at the CCS table (in her last week as a “fellow” at the school) with a few color minis (with English translations) that better show off her work. One is excerpts from her journal comic (see her website above) and the other is, I believe, a piece of a longer work that has been partially serialized in her Le Dernier Kilometre series from Colosse. I got to talk to Julie a bit this time and learned that we are both fans of the Belgian novelist Jean-Philippe Toussaint (she had a copy of his new book which I didn’t even know about). At the table with Julie was CCS student Laurel Lynn Leake. I traded for her minicomic “All Rumors are True” which was a semester project using a fairy tale or myth (I’m pretty sure that’s what she told me). It’s about a drag queen who gets involved with an art group that makes erotic videos based on myths. Formally it seems to be written like a television news story, with interesting use of text, sometimes as whole panels with abstract backgrounds, other times written largely over the images, all working like a kind of audio voiceover.

Comics poetry (poetry comics) also made a few appearances at the show. Alexander Rothman and Kimball Anderson (that link seems to be all older work) both use the terms for their work. Alexander traded with me for his mini “Reeling” which is the strongest piece I’ve seen from him, both in the writing/narrative and the visuals/drawing (doesn’t look like it’s made it online yet either in excerpts or to buy). Kimball is going to be in that Boston show I’ve mentioned (along with Warren and Julie and others), but I didn’t know he was going to be at this show, so I was surprised to see his name as I was browsing tables. We also traded some comics, his “Not We, Not I, But: a science fiction poem comic” and “Inside”. Only later did I wonder if these guys knew each other, and that I should have found out and introduced them, if not. Besides the comics/poetry usage their work shares a certain similarity.

One new artist I found as I browsed around was Neil Dvorak (warning: Flash site). His comics are all letter sized cream colored paper printed with black. Very uniform in appearance. His drawing style looks very photo referenced, with figures that remind me of Shannon Gerard’s. It’s a very clean, thin-line style with no tone/shading and very little in the way of spot blacks. His comics are short narratives, sometimes essay-istic or poetic, depending on the piece. They all appear to be online as pdfs: “So have you No.1” and “Easy Intro” are probably the best ones.

Sophie Yanow was working the Fantagraphics table and took a moment to talk with me a little. I was out of comics by then, but she let me do a delayed trade (I mailed her my side of the trade) for In Situ No.2 her new issue from Colosse (here’s info on issue 1). In Situ are short journal comics, what I like best about them is the way Sophie occasionally veers into abstraction.

Overall, I found most of the tables not worth my attention: lots of genre stuff, lots of people who probably want to be working for Marvel/DC, lots of cutesy stuff. One thing I realized as I walked around was how important covers are in such a situation. To a certain extent you can judge a book by its cover, especially when your walking around such a large room, you kind of have to. That’s partially why I’ve been putting comics on my covers. Both issues of MadInkBeard feature cover comics that are created from panels I used inside the issue. I think they give a decent indication of what one will find inside.

So that mostly sums it up. Great show? No. Good time? Yes. Lots of super exciting comics discoveries? No. The vast majority of stuff I got was from people I already knew (or knew of). Oh well, there’s always BCGF (or SPX if I make it down).