H2 is the only baseball manga I could find scanlations of which weren’t stuck in an annoying online interface. Mangascreamer has done an admirable job in getting out 29 of the 34 total volumes of this series. I’m eagerly awaiting the last five, which says something for the quality of this manga.

H2’s protagonist is Hiro a teenage pitching prodigy who quit baseball when a doctor told him his elbow could be permanently damaged if he didn’t stop pitching. He decided to go to a high school that has no baseball team at all and when the story starts he is joining the soccer team. His best friend is Hideo a hitting prodigy who goes to a high school with a prestigious baseball team. Hiro’s other close friend is Hikari, with whom he grew up and who is dating Hideo (Hiro introduced them). She also has aspirations to be a sports journalist.

Hiro soon discovers his doctor was a fraud and that he can pitch. He joins up with a girl named Haruka (yes, all four main characters have similar “H” names, and yes it is confusing at times) who is manager of the school’s baseball club. With his catcher friend Noda (who was also misdiagnosed by the same doctor, coincidentally enough) they form the club into a real competing team. Over the course of the series many other characters are introduced and play differing parts in the tale, sometimes for a chapter or two, other times on an ongoing basis across many volumes.

The primary end goal of the series is for Hiro, star pitcher, to face Hideo, star hitter, in the Koshien, which is the high school baseball national tournament. Covering three years of time (at least I assume based on what I’ve read and what’s left to read), we follow the two friends and their team’s ups and downs.

Adachi does not only focus on the baseball. He also intertwines a classic love quadrangle amongst the four primary characters as well as numerous side stories for various teammates, opponents, and family members. While a single baseball game may take a whole volume (or more, volumes 13 and 14 are almost all just one baseball game), sub-plots are always intertwined between scenes of the game. Long stretches between major games will also focus on the interpersonal drama of the characters more than the sport. Adachi achieves a successful balance and integration of the two.

This is solid genre work. Adachi maintains interest and suspense throughout with small and large narrative arcs: individual games, the larger Koshien goals, smaller subplots in the drama/romance, and the larger question about the various character’s relationships. Once I started reading, I was hard pressed to stop; Adachi always leaves some question unanswered, some moment in suspense. Though in the end, there is not much left in one’s mind when the reading has stopped. A week or so after finishing the last scanlated volume, the story nor any real themes stick with me. This is not necessarily a bad thing, just to say, this is quality entertainment but not much more (narratively or thematically, at least).

H2 is a shonen (boys) manga so the characters are not very complex and the romantic subplots operate on a surface and clichéd level. Though it is to his credit that Adachi manages to create a complicated love quadrangle that does not rely on character’s acting with absurd levels of jealous. All four protagonists care for each other and act with a certain regard for the feelings of each other, including those who might be considered competitors for another’s attention. Adachi also scatters the work with mild fan service (in this case, gratuitous bathing suit or panty images) where not even a slight attempt is made to work into the story (except a very few cases where we see this adolescent sexual interest through the eyes of one of the boys).

I don’t read enough manga (particularly shonen manga) to say how much Adachi’s work is similar to other manga artists, but to my eye it is not stylistically unusual. While reading, I started noting pages that were interesting to me for one reason or another, and for such a long work, going through these examples is probably the easiest way for me to discuss the work.

One thing I noticed with his page layouts is a tendency to divide a page in half and then break those halves into small panel groupings. Often a half page is broken down into one quarter page panel next to two eighth-page panels, usually with the larger panel coming first followed by the two smaller panels. This layout is repeated so many times it becomes a convention of equivalence to the American use of a 6 panel grid, a kind of irregular regular layout. 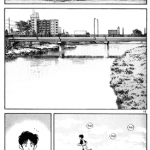 (Remember to read all these pages right to left! Excuse the low quality, it comes from shrinking down the scanlation pages (which look great at original size). Click for a better look.)

Like in many manga, Adachi uses a lot of establishing panels that set the scene and backgrounds. Almost every chapter starts with at least one (if not two) page that is solely used to establish the scene. In many cases this allows for backgrounds to be dropped out of subsequent pages so the focus stays on the characters. The page above is a nice example of a briefer establishing page. It starts with a mysteriously abstract image that becomes a reflection on water under a bridge then we see Hiro running by. 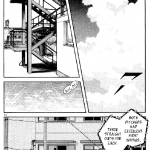 Similarly, the above page is a a scene shift. Moving from the ballpark where Hiro’s game is going on (in the previous page) to a dorm where Hideo and his teammates are watching that same game (on the next page). I’m not sure what it is about panels showing clouds, but I always read them as a kind of time stoppage. As if the clouds force us outside of the relentless forward movement of time. Adachi uses this device often throughout the series and it almost always reads with that same sense of pause. 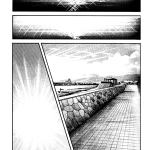 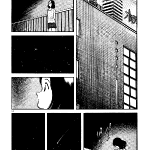 Another type of establishing sequence is this two page time shift that passes from one evening to the next morning. Again we see that reflection on the water as an almost abstract panel. 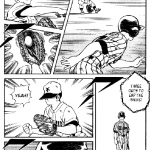 This half page is a good example of one of the baseball action scenes. The use of the speedlines and the progression fragmentation of the actors in the scene are typical. Moving from two characters to one to part of one (macro – mono – micro to borrow from Neil Cohn) forces the reader to provide the appropriate context. In this case it’s rather clear (the glove in the third panel being the first baseman’s as the runner is forced out), but at other times it is less so, particularly when dealing with characters that are secondary to the plot and hard to distinguish from one another (often the case with Adachi’s character designs). 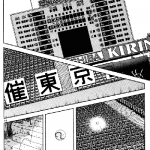 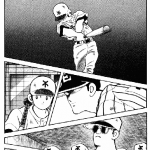 This scene, at a tense moment in a long running game, shows Hiro (super pitcher and, of course, a great hitter too), hitting a home run off his rival pitcher (one of the few characters in the whole series that comes off almost completely negative). The whole world drops away at this moment. No announcers, no sound effects, even the crowd (in a visual metaphor) disappears on the third page (the subsequent page returns them to the stands cheering). Nice placement of the ball in the bottom of that third page, too, as it travels down and off the page. 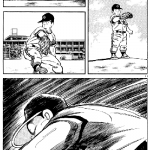 Here is an slight but effective stylistic change. This pitcher (another rival) is being seen for the first time, and his amazing speed is visually heightened by the use of denser more frenetic speed lines in the background and more line work to render the character. A highly effective strategy. 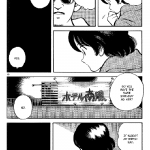 This page is a strange one. Two panels are almost completely black except for a kind of abstract light. I’m just not sure what to make of it. Do the black panels represent some kind of subjective viewpoint (the sky past that sign we see in the middle panel?) or an abstract emotional representation? It does add a mystery to the page (I’m actually still a little confused about the birthday day subplot). Or perhaps, like the home run scene above, this is an image of the world falling away, the whole world except a small point of light that hovers on the margins, the enlightenment of Haruka’s solution to the mystery? 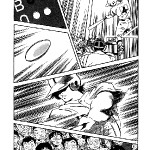 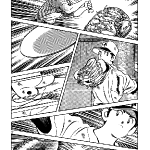 Another baseball example, where we see whirlwind sequence of strike-outs, which go by so fast it’s almost impossible to follow along. Adachi only rarely slows down to focus on pitch by pitch action. A lot of his baseball scenes focus more on the psychology of the players. This is very much character based action. He takes the time to introduce opposing teams, at least one player from each, and gives them some small subplot or background that adds to their mental state or performance during the game. Like other baseball comics the focus remains on big plays and big stars, but Adachi works to blend all this with the characters’ life off the field. Since he works so many games into the series, each one can have its own unique focus. 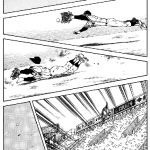 This sequence is notable for the slight confusion inherent in the scene, a confusion which not only adds suspense but an element of realism, as you might get this same confusion (did he catch the ball? didn’t he?) when watching a real baseball game. The layout and composition of the top three panels add to the effect. The ball in the first panel is placed right above the player’s glove in the second panel, which adds an impression that he will catch it. The third panel continues the player’s motion across the page and by taking us to the edge cuts off an immediate apprehension of where the ball went. Panel four shows the crowd roaring, but shorn of any text one is still in the dark. Only as one notices the small white circle in the field of gray that is the last panel do we realize the player missed the catch.

Overall, this should give some idea about the style of H2. It’s the best, most entertaining baseball comic I’ve found so far (which isn’t saying all that much I guess since I’ve only found a few), and the one that seems most interested in the game as a game. Of course, it does have the advantage of length, which none of my other baseball comics have. This is one of those manga that you think would make a great release in English. There’s gotta be crossover manga-baseball fans that would gobble this up. It’s quality material.