Reading Ganges #1, the latest comic from Kevin Huizenga, I realized what makes his work stand out from the rest of contemporary comics. Huizenga tells stories of everyday life imbued with the imagination, thought, dream, and fantasy of the internal life. Against the scores of superheroes, science fiction, fantasy, horror, mystery, and self-conscious autobiography, Huizenga’s Glenn Ganges is a rather plain man with an active mind. In the simple events of daily life, he creates evocative, emotional, and interesting stories that are worth reading and rereading.

Ganges #1 contains a group of stories that take us through one evening with Glenn and his wife, Wendy. The division of the evening into shorter stories reminds me of Jaime Hernandez’s comics. Similar to the stories of Maggie, Hopey, and friends, Huizenga’s stories are both individuals and parts of a series, but Huizenga’s stories are even more grounded in realism.

The representation of thoughts is nothing new in comics. Most often taking the form of thought balloons, thoughts are rarely represented as images (excepting dreams, a different category of internal process). What makes Huizenga’s work stand apart is in his use of a comics interior monologue where thoughts are visually represented on a level equal to the external reality.

Glenn’s evening begins as he is walking to the library (the world of books is always prominent in the Ganges stories). In an occasionally disorienting sequence, Glenn considers the nature of time and memory, thinking about that same walk the previous year. The story turns into a musing on the infinite time of the finite mass of the universe. In a brief sequence, Huizenga shows the neighborhood progressing from the present through some kind of destruction to a blackout and a new big bang that then leads back to Glenn’s present. Huizenga uses an interesting device where he puts narrative time captions (i.e. “Last spring”) inside thought balloons, creating an often confusing mixing of thought and reality, past and present. This use of thought balloons to bracket the elements of interior monologue is one of the ways he represents the internal life of Glenn.

In the second story, Glenn spies a kid on a bicycle littering. He then imagines various stories about the kid: what happened to him, where he goes, and what his future holds in store (a hilarious view of soldiers in bicycle helmets as well as the kid in his bicycle helmet as a president). These visualizations are panels inserted between other panels showing Glenn with a thought balloon containing his interior monologue in words. The internal monologue panels are occasionally narrated with Glenn’s voice but are also shown as unnarrated panels. The move from thought balloons to narrated panels to unnarrated panels is a progression of movement from the external to the internal. Throughout the book, Huizenga’s uses these elements to show Glenn’s thoughts, though not always as a direct progression. 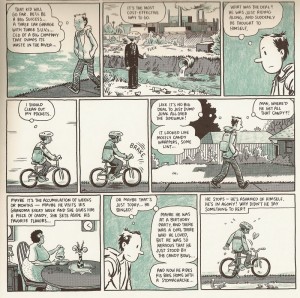 For instance, throughout the rest of the stories, the bicycle-helmeted kid and his candy wrapper litter make brief appearances in Glenn’s backyard, as if the event sticks in Glenn’s mind. In one panel Glenn is in the living room telling Wendy he is going to get more coffee. She decides she is going to bed, and we see Glenn heading past her down the hallway. In the next panel we see a small backyard, enclosed by a picket fence. That same kid stands in the center of the yard (from earlier in the story we know this is Glenn looking out the kitchen window). Glenn is still thinking about that kid. 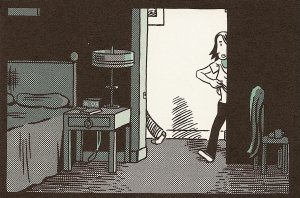 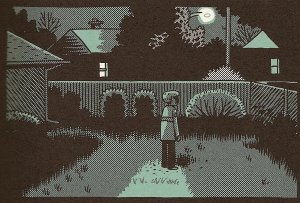 In a moving story that closes the book, Glenn lies in bed next to a sleeping Wendy. He thinks about the universality of his situation, watching the one you love sleeping. His thoughts spiral into another whirl of infinite people in the same situation, similar to his whirl of repeated time in the story that opens the book.

This concept of infinity and repetition bookending Ganges is extraordinarily apt to the quotidian events of the plot. These everyday events–walking to the library, reading a book, going to sleep with one’s partner–are repetitions in themselves. Glenn’s thoughts in the first and last stories take these individual repetitions and place them in the context of a universal repetition, a kind of universal everyday.

This mixing of the everyday, the universal, and the individuality of the interior monologue is part of what makes Ganges (and much of Huizenga’s other works) so wonderful and unique within the comics milieu.

Another part is Huizenga’s drawing style, which in its simplicity, iconicity, and use of comics shorthand is reminiscent of strip artists of previous decades as well as European masters like Hergé. In this book he uses screentone to create grey and two shades of blue, often with a soft pencil texture, which add variation to the artwork and allow Huizenga to use fewer lines. The page layouts are a rather European four tier page on almost every page, unremarkable but readable.

If you haven’t read this yet, you should. Ganges #1 is the best comic of 2006, so far, and it will be stiff competition for the rest of the year’s publications. Kevin Huizenga eclipses many of his more popular peers and elders.