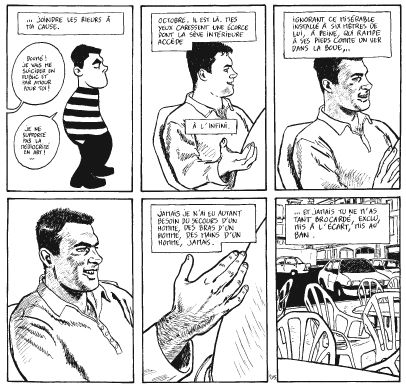 from Journal 3 by Fabrice Neaud

Matthias Wivel: I also wanted to ask you about the choice to draw in this naturalist fashion. It’s very different from the work of many other autobiographical cartoonists, and because you talk about real events, it becomes a very clear choice on your part. You made this choice early on obviously – what were your thoughts?

Fabrice Neaud: It’s very difficult to answer that. Philippe Squarzoni has written an article on my work which answers that question, but I don’t quite recall all of it – it’s a very good article, very precise, and it’s going to be hard for me to explain, but yes, it’s a choice I made a long time ago and it makes all the difference. First of all, and very basically, I used to be a portrait painter and worked in a realist style, so I came to comics with a realist drawing style, based on observation from nature. That’s the basic explanation.

Beyond that, the choice to draw realistically… I’m going to have a hard time explaining it here, but I believe that only from a realistic starting point can you deconstruct your drawing. If you start out with symbolic drawing, you can play around with it like with Legos, you can put it together in different ways, but you can’t move back toward realism. If you create a very cartoony character, like Tintin, you can’t ever draw his face realistically. It doesn’t work. Hergé had this problem: I’m thinking in particular of that spread where he has, I no longer remember which character opening a newspaper, and on that page there is a close-up view of what he is reading, and his thumbs are drawn in very large and very realistically, and it just doesn’t work.

It’s what – using terminology borrowed from photography – I call the problem of going from high resolution to low resolution. If you take a photo of someone far away, someone unclearly defined, very pixelated, you can’t then enlarge the image of that person and make it clear; you can only loose definition. So, in order to give the illusion of deconstruction in drawing the widest possible expressive field, you have to start out with as realistic a style of drawing as possible, then all the levels below that are accessible. Once you’ve degraded, you can’t go back to high definition. With the exception, perhaps, of works like Maus: when you’re evoking very powerful historical events, I think you can make it work by drawing them in a rather minimalist manner and then at some point inserting photographs of the reality depicted, which allow an expanded understanding on the part of the reader.

From an interview with Neaud at The Comics Journal.