This post originally appeared at The Panelists on April 20, 2011. 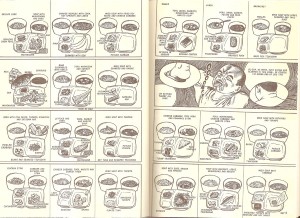 I was reading Kazuichi Hanawa’s Doing Time (Fanfare/Ponent Mon, 2004) and came upon this spread (p.46-47, read right to left) early in the book. Earlier this week I read Greice Schneider’s post on the Comics Grid about Jason’s use of excessive type in Hey, Wait… where she writes: “Meaninglessness, though, can also be expressed by adopting an aesthetics of visual excess (since both lack and overload can be equally menacing to the production of meaning).”

This spread from Hanawa’s book about his time in Japanese prison (for possession of an illegal gun) is a great example of visual excess. It features 21 panels showing the meals Hanawa is fed, with only a single varying panel which focuses on Hanawa’s concern that he will get “flabby” because all he does is eat and sleep, i.e. from the excess. So the excess is both visual and thematic. A quick scan of the spread could lead one to believe the many panels of meals are simple repetitions, yet each image is distinct, despite it’s basic sameness. In fact, as far as I can tell (without making a list and checking it closely), each meal, and even each element of each meal, is unique. There are no actual repetitions on the diegetic level. Hanawa’s meal is different each time.

This uniqueness found in the repetition of the mundane is a vital part of the concept of the everyday. Our daily lives can, on the surface, appear repetitive and banal, yet, examined at a closer level, the repetitions of our daily lives are variable. Hanawa’s limited and highly structured life in prison attunes he and his cellmates to the repetitions and variations of the everyday. In the book itself, Hanawa’s stories break down any sense of time as being a continuous ordered flow of recognizable events. It’s never quite clear when each chapter takes place and how much time passes from one chapter to another, as there are no real markers except the structured parts of each day. At times Hanawa is in a shared cell, at times in a single cell, without any real sense of when or how he moves from one to the other.

This spread also takes me back to another article by Schneider “Comics and Everyday Life: from Ennui to Contemplation” (European Comic Art 3.1 (2010): 37-63), an excellent article I command to your attention. In it, she discusses representations in comics of everyday life and strategies related to showing ennui and contemplation. In reading the spread above, once can access both of these states, the ennui of the repetition and time passing through sameness, as well as the contemplation of all these varying meals, a seemingly endless variation of foods (even more worthy of contemplation for the non-Japanese, who will find the foods even more strange and needing of attention).

Derik, thanks for this very interesting analysis of Hanawa.

Doing Time is a book I admire but have difficulty reading straight through, and certainly reading it quickly is impossible, at least if you want to get anything out of it. Its reliance on repetition with variation is one reason. Another is its sheer density in terms of drawing and of minute information imparted. I find the book “thickens” the reading experience almost to the point of frustration, in the process making powerfully evident to me the sheer monotony and restricted scope of prison life. It is observant and particular and thickly layered with visual information—spatial, textural, very, very minute—almost to a fault.

I wonder about the degree to which Hanawa means this to be a contrast or rebuke to the usual reading experience of manga, which are notorious for being read very, very quickly. (I’m especially interested in this in light of Cools’ article, cited above, which I’ve begun to read.) In a sense Doing Time is an anti-manga, a deliberate flouting of reading conventions (much as, say, Pekar & Crumb’s “American Splendor Assaults the Media” deliberately flouts the “show, don’t tell” dogma).

I suspect that Hanawa was deliberately going for that effect. The work as a whole does seem different even from his own work (the few other pieces of his I’ve seen were more of the grotesque/horror type). The sheer lack of any drama or conflict works against just about any narrative, but especially more conventional manga.