My wife and I took a trip down to Washington DC the other weekend with the primary goal of seeing a Phillies game at Nationals Stadium (a nice stadium, by the way, though we lost the game), but, as is the case with all our trips, we took in a few musuems, art museums mostly.

The big show we planned to take in was the Yves Klein retrospective at the Hirshhorn: Yves Klein: With the Void, Full Powers (there through September 12). I’ve been a fan of Klein’s work for a long time, I have a bunch of monographs, but this was the first time I saw more than one of his pieces at a time. The Hirshhorn itself is a large circular structure with a central courtyard. The show took up the main section of the second floor, and, because of the circular path, allowed for a clear chronological movement through the exhibit. The sheer amount and variety of work on display was impressive. They managed to gather examples (often many examples) from all Klein’s types of works, monochromes, anthropometries, sponge sculptures, film, writings, drawings, fire paintings, architectural designs, etc. It truly is a complete retrospective. The only piece I noticed the absence of was the lack of any audio of the “Monotone Symphony.” Much credit to the curators who focused on Klein’s writings as the primary text used throughout the exhibit. Placards noted names, dates, and media, but almost all the explanatory or critical commentary was provided by quotes from Klein’s own writings. Klein wrote throughout his life about his work, often in an almost poetically lyrical way, so the quotations acted both as part of the exhibit’s works and as guideposts for Klein’s historical development and ways of looking at/thinking of the works on view. Seeing all these works together really made the connection for me to Klein’s various series in relation to their basic elementary thematics: water, air, fire, earth. The fire paintings have always felt a little out of place for me in his oeuvre, but, in connection with the watery blue monochromes, the earthy sponges and resin covered paintings, as well as the airy immaterial works, they felt much more part of a whole in an almost pre-Socratic philosophic context. The show was impressive, I highly recommend it if you can get to the museum. There are a lot of materials online about the exhibit (kudos to the Hirshhorn on that), including audio recordings of gallery talks, a whole series of photos on Flickr, and videos on YouTube. Unfortunately, no photos were allowed in the exhibit, so I didn’t get any photos of my own, but here’s one of the fire paintings: 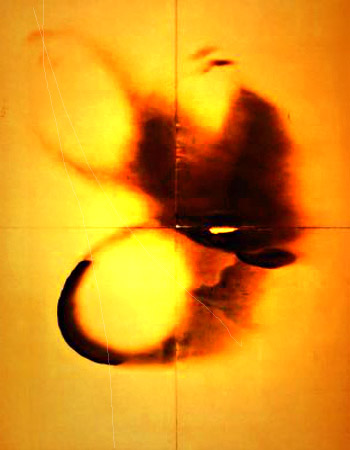 The Hirshhorn had a permanent collection on another floor which included a number of interesting pieces. The dark room of almost completely abstract “Seascape” photographs by Hiroshi Sugimoto were beautiful and seemed to glow in the darkness. They also had a nice Motherwell, which I snapped a picture of: 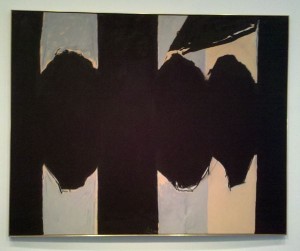 And a couple Francis Bacon’s, a painter I’ve been wanting to learn more about (spurred on by Domingos’ praise of him): 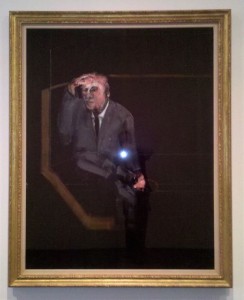 We also visited the Museum of American Art, which had a Norman Rockwell exhibit up (the one from the collections of George Lucas and Steven Spielberg). A lot of his works gain so much when you see them in person, rather than reprinted, as you can see the brushstrokes and texture. If at times he is far too clichéd or hokey, many times his work was quite interesting and engaging. Also, his charcoal/pencil prep drawings were beautiful in their own right. I was thrilled to find a large Jenny Holzer light piece, which I spent time reading (it slowly spun out a series of statements around a column of lights), as well as a Mark Tansey painting “Interception” (1996): 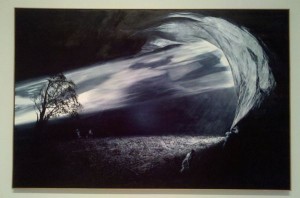 Though my favorite painting in the whole museum was this lovely Milton Avery painting entitled “Spring Orchard” (1959): 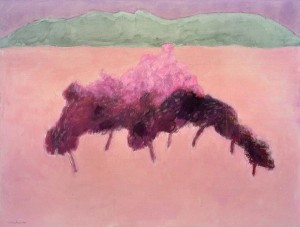 I stood and stared at this one for quite awhile.

The National Gallery also had a bunch of great works. I was really impressed with Barnet Newman’s Stations of the Cross. I’m not normally a fan of his work, but this series of large abstract canvases had their own room in the bottom floor or the East building. Being able to take in a series of paintings on their own, without other works (and often other people) getting in the way, is a great way to be able to really appreciate them. The room containing a series of Twombly paintings in the Philadelphia Museum of Art is my favorite place in the whole museum partially for that reason. You can sit and contemplate the paintings or you can walk around and consider the sequencing, the relations, the repetitions. I think Newman’s paintings really gained something for me when put into this kind of sequence. By themselves each of the Stations of the Cross are not particularly noteworthy, but in a series there is much to appreciate by way of difference/repetition. In a way it’s an abstract comic. Here are a couple images from the series: 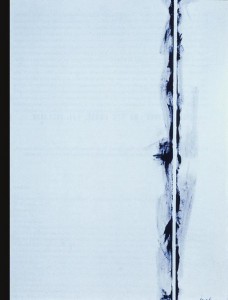 Stations of the Cross no.1 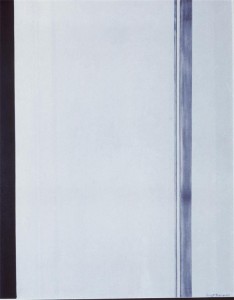 Stations of the Cross no.2 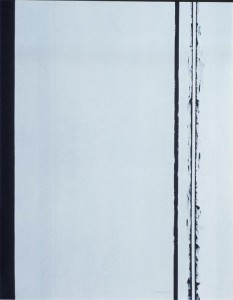 Stations of the Cross no.3

Way at the top of the same building was a room of Mark Rothko paintings. I’m not sure if they were intended as a sequence or series, though they at least read as variations on a theme. The room had a half dozen or so paintings that were black on black, or dark brown on black, or purple on black… it’s hard to say. They were very dark and subtle in tonal variation, both reflective and opaque, with a shifting sense of depth. The room was dim and there was music playing, music that was written for the Rothko chapel in Texas. I sat and stared at a couple of the paintings and they were really moving, moreso than any Rothko painting I’ve looked at before, (Or maybe I never took the time, since they are usually just placed there in between other paintings). 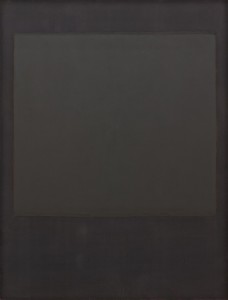 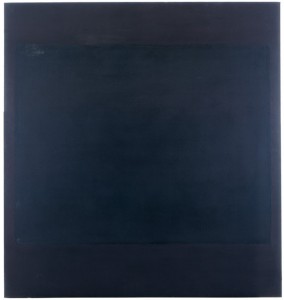 I’m sure I’ve forgotten something, but those are the works that stuck with me.