Seth’s design of Fantagraphics’ Complete Peanuts series is beautifully done beginning with a paired down simplicity (compare to the busy covers of Ware’s Krazy & Ignatz design) and ending with slight variations in each volume (one character is featured on each volume), a lasting design that retains its worth even after five volumes. In this sense the design mirrors the content: Peanuts is a minimalist strip that traffics in endless variation.

The endpapers are my favorite part of the design. They feature a montage of background objects from the strip–houses, trees, fences, a car, a snowman–shorn of any accompanying characters. I could read a whole comic of just Schulz’s minimal backgrounds. Those backgrounds mark the boundaries of the Peanuts gang’s world: streets, yards, fields, living rooms, and bedrooms. Their whole world, as we see it, plays out in those areas. This is really driven home when you read a lot of strips at once (like a whole book). These places are like the Coconino County desert in Krazy Kat, endlessly varied, yet somehow always the same. 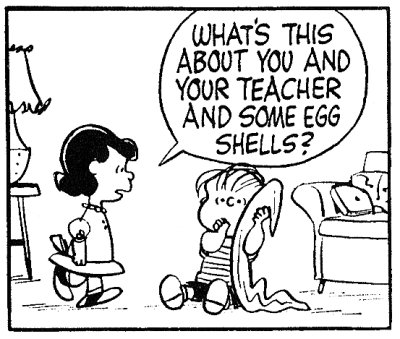 These backgrounds are alwaya partial. We never see a whole house, just one end. We never seem to even see a whole couch or tree, just ends and trunks. A few examples, including a rare look at a mailbox. 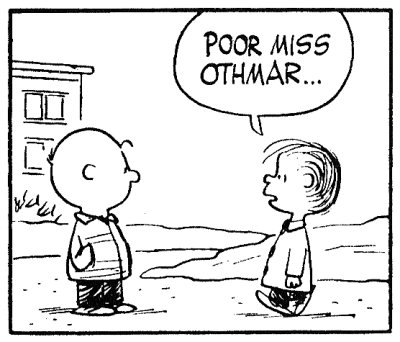 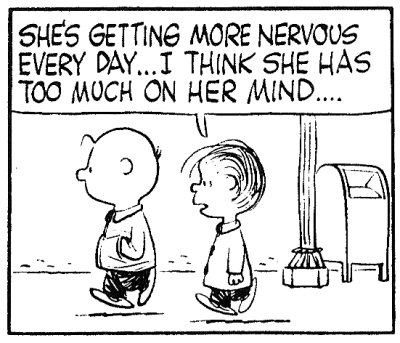 Two pages in (after a series title page) is a spread that features a simple grassy horizon line, green beneath, blue above. The next spread is completely filled by a stone wall. These two horizons are two of the most common Peanuts settings, where much of the conversation takes place. Here they are (again, like the endpapers) empty of characters. These empty landscapes and backgrounds are kind of sad, as if the characters have all grown up and moved on.

After reading five volumes (that’s over 10 years of daily strips) Schulz’s variations become ever more prominent. Variations that are familiar to anyone who’s read Peanuts: Charlie Brown and his kite, Linus and Snoopy fighting over the blanket, losing baseball games, Charlie Brown getting insulted by his friends, Lucy and Schroeder at the piano, and more. I find some of these situations always amusing and inventive, others I quickly tire of. I can’t quite place why one would fall in either category. Perhaps it is just the quality and inventiveness of the variation or the comfort in the identical ending to each variation. One’s almost tempted to do some kind of side-by-side study.

Over the course of the series one also notices the shifting cast of characters and their prominence. By this volume Shermie and Violet, two characters introduced from the beginning, have lost any real prominence. Neither ever developed much of a personality and I get the idea that Schulz just threw them into a strip occasionally because he felt he had to. Their lack of prominence is relative to the rising of other characters like Snoopy (as he becomes more a character than just a dog), Linus, and (in this volume) Sally.

One last comment about this series: the index. An index in each volume is such a boon to the reader. I love being able to look through the index and refer back to strips, or to look up the number of times “baseball” or “vocabulary/spelling” have appeared. For a definitve edition of a world famous strip, an index is invaluable. I can only hope that some combined index might appear in a future volume (please?).