This week I spent an autumn afternoon watching Yasujiro Ozu’s An Autumn Afternoon (Criterion, 2008). Then I spent an autumn evening watching it a second time with the excellent commentary by David Bordwell (whose blog I highly recommend). His is one of those rare commentaries by someone who has interesting and intellingent things to say for the length of the movie.

Last time I posted on Ozu, I shared some stills of the opening sequence. I noticed similar sequences a lot more this time around, and Bordwell talks on the commentary about the way Ozu cuts the shots together, using a repetition of elements in the frame to join them narratively and visually. Here are two examples that I quite enjoy (also a great example of Ozu’s color use). In all cases these shots have no camera movement. Most of them have people walking through the frame as the only movement. 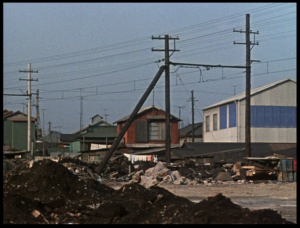 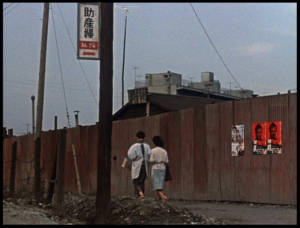 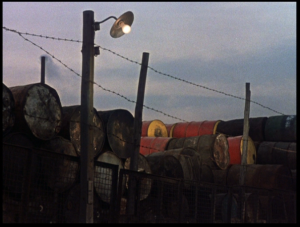 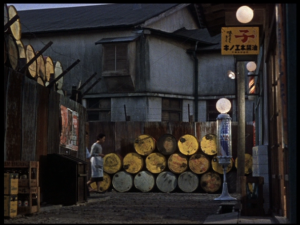 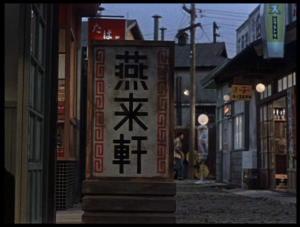 Note the repetition of the poles (telephone? electric?) then the barrels then the signs. 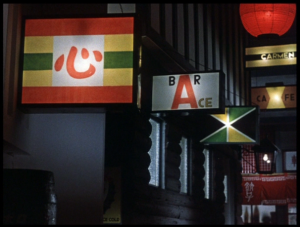 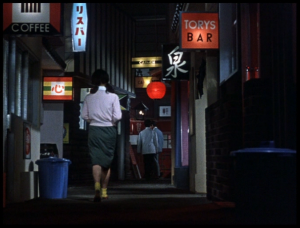 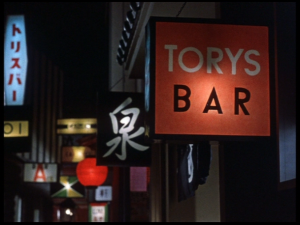 In this sequence, I love how the the red/yellow/green sign in the foreground becomes part of the midground in the second shot. The “Tory’s Bar” sign that is in the midground of the second shot, moves to the foreground in the third shot. It is almost as if the signs are switching places with each other. It creates a great sense of movement without the camera moving at all. In that way, it’s a lot like comics. 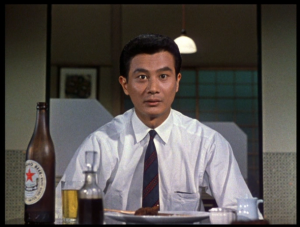 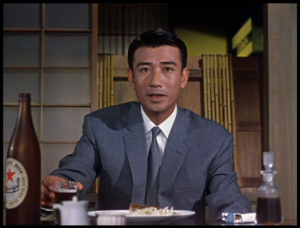 In this long conversation sequence, notice how each character has a beer bottle at his right (our left). There are two beer bottles on the table, but Ozu frames the shots so we only see one in each shot. But the one soy sauce bottle on the table is always kept in frame so it appears to ping-pong back and forth throughout the scene. Bordwell points this out in his commentary (I’d have not noticed it on first viewing otherwise). Ozu makes much use of objects that sit between characters in a conversation. They repeat across shots, often providing bursts of colors and anchors for orientation.

I highly recommend this latest Criterion DVD. As an extra bonus it has portions of a French documentary about Ozu which features Georges Perec! That’s the only time I’ve ever seen him on film.