Over the weekend I watched Yasujiro Ozu’s Floating Weeds, a 1959 remake of his own earlier A Story of Floating Weeds (1934) (both available on a 2 disc set from Criterion). The story involves a wandering acting troupe, whose master takes them to a seaside town where his former lover and illegitimate son live. The son has been told that the master is actually his uncle. The master’s current lover (an actress in the troupe) is jealous when she finds out about the other woman. Trouble ensues, involving Ozu’s usual family/generational strife and the constant sense of time passing and the world changing. A distinct sadness permeates the film, particularly for the older characters who seem to feel themselves fading into the past (this bears some relation to the oft used symbol in Japanese art of the flower, which blooms and exists beautifully but only for a short time before dying).

Ozu’s films are slow and infused with the culture from which they came (particularly the pre-WWII Japan), which can make them difficult to watch. What is not difficult to enjoy is the beautiful compositions Ozu creates. This film is in color (I think all of his films I’ve seen previously were in black and white) which adds another visual delight. 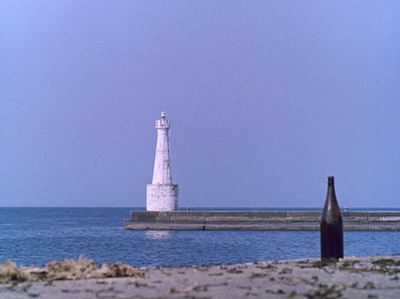 The first post-credits shot in the film is a beautiful and simple composition. Which is followed by a series of shots showing the lighthouse in the distance behind a variety of foreground objects. 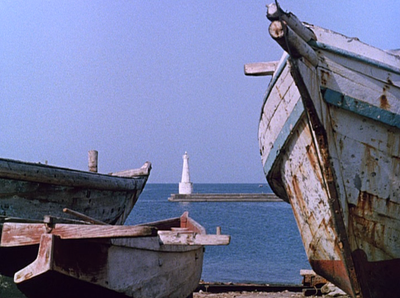 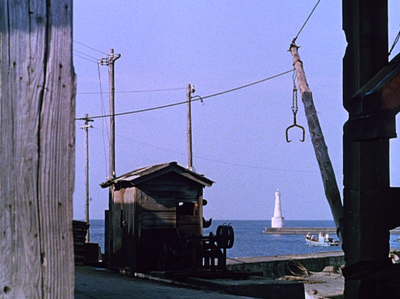 The depth shown here is used throughout the film. Ozu makes much use of fore, mid, and background extensively. Something I noticed in particular is the use of a foreground object (often walls and buildings) to act as a screen behind which character enter and exit the frame. This tends to tighten the spaces in which the characters act. 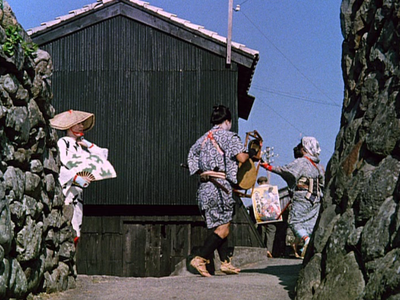 Early on the troupe parades through town in numerous scenes where characters move through alleys/streets. 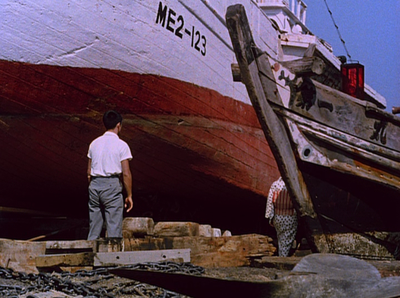 Later on the son and a young actress are sitting and talking by a ship. The actress stands and walks away, disappearing behind another ship. 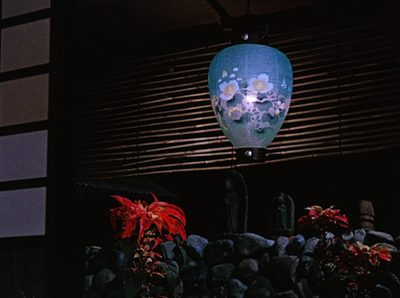 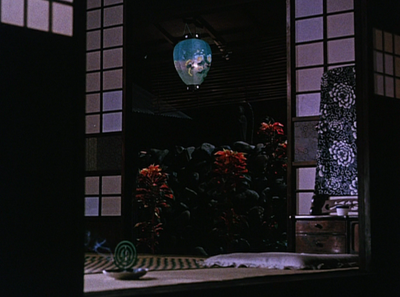 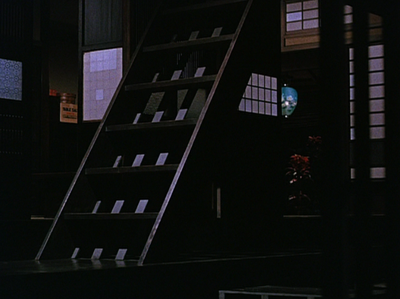 This series of three static shots in the film begin on these red flowers (which appear a few times) and a blue lamp, then jumps back twice. This is not a continuous move, but a series of cuts which is quite comics-like (manga-like). 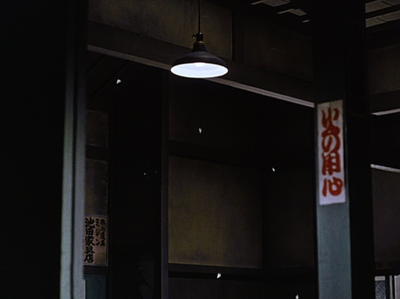 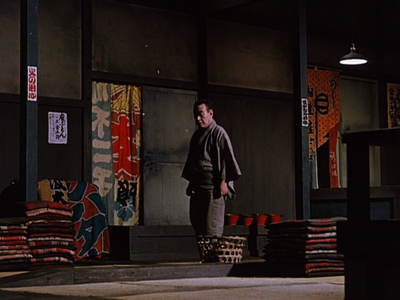 Two shots showing small bits of white paper (so says David Bordwell in his Ozu book (you can download a very large pdf of it)) falling from above. I’m not clear on the significance of this, but it recurs a number of times at important points in the film. Like falling petals (what I thought they were when watching the film).