A new project, overlapping with my “30 Days of Comics” posts, I’m going to try to post 30 days in a row on 30 different comics. I really need to clear off the desk, floor, shelves that are piling up with “to review” books. I’m not sure how this will go, some will be full reviews, some may just be brief comments on certain aspects of a work. It should nicely lead me up to a “Best of 2009” list at the end (early January). So, here we go…

Dear John is a hybrid kind of book: art, interview, letters, comics, and commentary on those comics. 170 of its 250 pages are devoted to letters and doodles sent by Alex Toth to the editor John Hitchcock over a 20+ year period. The letters are a mixed bag, with Toth veering between discussion of comics (his and others), his personal life, and a general grumpiness. It’s not clear whether these are selected letters and if/how much they are edited. As half of an ongoing conversation they feel incomplete, are lacking context, and, on the whole, are not the strongest parts of the book. At one point Toth mentions purposefully writing brief letters, and this brevity tends to remove most of the interest that comes from reading someone else’s letters: having the person reveal themselves through words, the ideas that come out through the informal mode, and glimpses into daily life.

The brevity of Toth’s letters echoes an oft-returned to topic in his discussion of comics: the idea of simplicity, making the complex simple, “stripping away embellishment”, and clarity. This aspect of Toth’s work–how he can show so much with so few lines and shapes–is one of its most clear visual identifiers.

While Toth does at times discuss comics as process/artform in the letters, he does so at more length in the more formal writing in the book–introduction, interview, commentaries–which in general are the more informative writings. In the introduction to the book, he speaks like a teacher to students, discussing the merits of doodling, the simplicity, the looseness, and the experimentation of it. As experimentation, the “doodles” work on a microlevel. Toth does not, as far as we see, stray far from his normal mode. The images consist mainly of pages filled with drawings of people, airplanes, and cars, with the occasional landscape or tiny comics panels thrown in. Toth’s ability to create characters and render them with minimal fuss is highlighted. The faces and figures have a dynamism that is extraordinary, even the silhouettes are powerful and readable. The introduction gives me the impression that some of the characters are drawn from television or movies, perhaps a lesson in itself for cartoonists looking to expand their characterization. 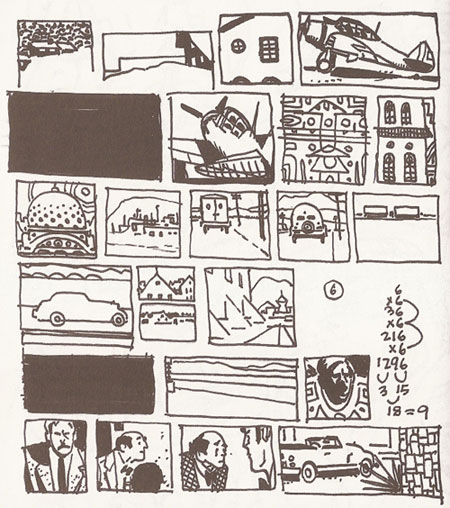 Some of my favorite doodles are tiny sequences of panels (see above) Toth fills with abstracted characters, landscapes, or shapes, as if he’s shrunk down a comics sequence to tiny size. I’ve always found something powerful and evocative in extremely tiny thumbnailed panels: how readable figures and objects can be found in what, on close examination, are the merest of lines and shapes. (Sidenote: I actually did some work in art school taking very tiny images I drew and blowing them up many hundreds of percent to make large prints.)

I want to read something into the predominance of storyless characters in these doodles, as if Toth were bursting with images but missing any context within which to put them. In a comics system where jobs are divided: writers, pencillers, letterers, Toth always seems to be an brilliant artist lacking a great collaborator to write stories for him. In the letters he mentions being unable to settle on any idea, having too many ideas, being unable to create a longer work. His skill lay not in the ideas but in the execution, and one can only imagine what he could have done with more quality writing.

This is most clearly evident in the last section of the book, featuring four short comics stories side-by-side with Toth’s commentary on the pages. The section is billed as Toth talking about some of his “most celebrated” stories, and if one takes that literally, it’s kind of sad. The stories are rather dull affairs, nicely drawn, nicely layed out, nicely composed, but… lacking. Like almost all of the Toth comics I’ve read, I feel the distinct lack of good writing and good ideas behind such a skilled artist. Two of the stories here are written by Toth himself, potentially disproving any ideas that he should have been doing all the work himself (that is, writing and drawing).

Throughout the book, Toth stresses the importance of storytelling in comics (“it’s our only reason for being there as cartoonists”). How the main point is to simplify the images and create them so as to best tell the story. For an artist who focused so much on storytelling, it’s depressing to think of the quality of stories he worked so hard on.

The commentaries themselves (and the letters too) bring forth the self-critical aspect of Toth’s personality. He spends more time analyzing what went wrong, what he’d like to have done differently, than discussing anything else, as if all he could see were the flaws. There’s still much to learn from what he has to say, but the tone gets tiring. You can see some of Toth’s annotated pages at the Toth Fans website.

Toth mentions Roy Crane a number of times and praises him highly. With Fantagraphics putting both Captain Easy and Buz Sawyer reprints in the coming year, I think Crane is due for some major attention (I know I’m looking forward to both). Toth, with his lack of an major consistent work, seems doomed to reprints of inconsistent short stories and minor appearances in larger volumes. I’d love to see a Toth’s greatest hits type collection, but I imagine the numerous copyright holders wouldn’t go for such a thing.

If you want to read my commentary (much more image based) on some of Toth’s comics, I’ve written about both Zorro and “Man of My Heart”.