It is a sad coincidence that I learned of Alex Toth’s death late last week, only a couple days after I finished reading my first book of work by him. I’ve heard him praised a good bit, but I was reluctant to read, particularly since his name is most often linked to the name of Zorro. I can’t say Zorro has ever interested me, but, after a look at some of the work at the Alex Toth fan site, I ordered this book.

One testament to Toth’s skill at comics is the fact that I read 250 pages of Zorro comics. The scripts/plots are atrociously banal, apparently written by the same men who wrote the tv show with the caveat that the narration and dialogue remain unchanged in the comic. Toth, given these poorly written, overly narrated scripts, does amazing work transforming them into comics of great visual richness. The stories still suck, but it’s worth the time just to look.

One can praise so many elements of Toth’s work: dynamic compositions (for my money, better than Kirby), a sinuous line of which I have much envy, beautiful realistic yet minimal rendering, the balanced use of spot blacks, clear and dynamic narrative breakdowns, and the visual punch of the sound effects. Paging through the book I was tempted to start rampant scanning of samples as a way to illustrate all these praiseworthy elements, but instead I have limited myself to 5 samples (4 panels and one 4 panel sequence).

Toth’s textured brush work is the highlight of this panel, as is the composition, which is extremely crowded but perfectly fitting with the content. I love how the characters just disappear into the brush. 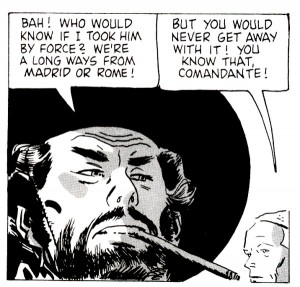 The composition here is so thematically rich I had to sample it. The “bad guy” comandante in the front, haloed by his black hat, visually and narratively looms over/dominates the hapless priest, pushed into the corner and lightly rendered, mostly white to the comandante’s black. The cigar adds to the flow of the panel, along with the curve of the hat and the matching curve of the word balloon tails. Simple but oh so effective. 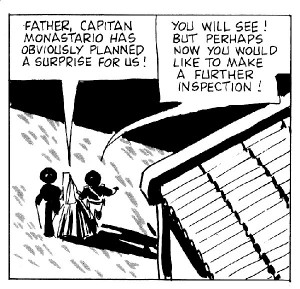 Another simple but beautiful composition. The black area at the top and the edge of the roof nicely subdivide the panel into three sections of differing texture. The figures are a great example of Toth’s minimal almost impressionistic rendering. One can clearly tell what is being pictured, but if you look too close the shapes and lines that make up them are quite abstract. Once again the tails of the word balloons are visually congruent with the composition (something one doesn’t see much). The angle of view here is also quite unusual. 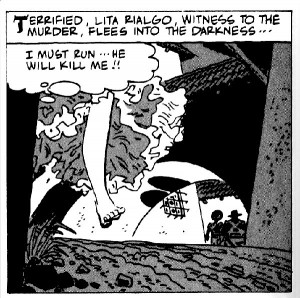 What a great panel this is, particularly with the worm’s eye angle. The leg, foot, and hem of a dress in the foreground are not only exquisitely rendered but provide all the information we need to know that it is a running woman. The angle of view makes it seem like she is passing by us. The road, the semi-circle of the passageway, and the roof-to-building lines all lead us to the two small figures in the distant (which lead us into the next panel where they are the focus). The narration (dictated by the unalterable script, no doubt) is not even necessary. 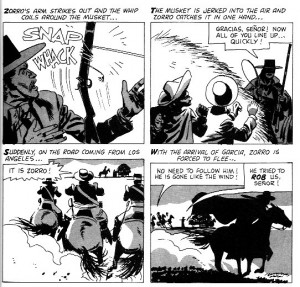 A great example of Toth’s skill with breaking down the narrative. The narration can be skipped over and one can easily follow the events. In the first panel we see an example of Toth’s sound effects, which have a punchy attractiveness that I can’t quite figure out–so simple, yet very effective. The composition moves us through this panel by way of the whip into the next panel which answers our questions about what is going on (similarly to the way the soldier sees the whip first and then Zorro). The third and fourth panels have more examples of Toth’s rendering of small characters in the distant with minimal ink or detail and maximal recognizability. The fourth panel also shows Toth’s skillful use of very expressive silhouettes. From panel three to four we see the visual constancy of the riders from the foreground of panel three to the background of panel four. It allows us to clearly understand the switch from one angle of view to its opposite because the distant riders are the first thing we see moving into panel four.

Just a small taste of Toth’s clear skill with the workings of comics. I’m eager to see more of his work (if I can find more), though I can only wish that he had had the opportunity to do more stories of his own creation (or worked with better writers) as it seems much of what he drew came from inferior scripts. That said, this book, one of the few available of Toth’s work (and the only that seems widely available) is worth the price. The reproductions are crisp and Toth himself put in the half tones in lieu of the comics’ being in their original color.

Comics Journal has a good long piece on Toth up by Bob Levin.