The opening scene in Frederic Boilet’s nouvelle manga Yukiko’s Spinach consists of seven pages, each divided into three vertical panels. They show bright lights, buildings, and gaudy signs but not people. The lights are blurry white circles. In one sequence at the end, a hotel sign is shown at progressively larger sizes across 5 panels until we can hardly see more than its white light. These panel show us the world from the perspective of the protagonist and narrator, a first person view. This perspectival tactic is the most interesting part of the book.

The story tells of Boilet, (the character/author stand-in, I am not sure how much of this is autobiography) who lives in Japan working as a manga-ka, and his brief affair with a young woman named Yukiko. We see a number of their meetings over the course of 7 weeks from their first acquaintance to their last rendezvous, all through the eyes and pen of Boilet.

Boilet uses a number of tactics to create the first person perspective. He composes his panels in such a way that we see through his (or rather the author character’s) eyes. The compositional focus moves around in the panels like the unsteady eye of a human. For instance in these three panels we see Yukiko at dinner but unlike many comics (or film/tv) where we might see a steady unmoving view of the character as she talks, Boilet shifts the composition to recreate the appearance of his gaze wandering to her breasts, her face, the leg of a woman at the next table (Yukiko almost completely cropped off panel), the wine glasses: 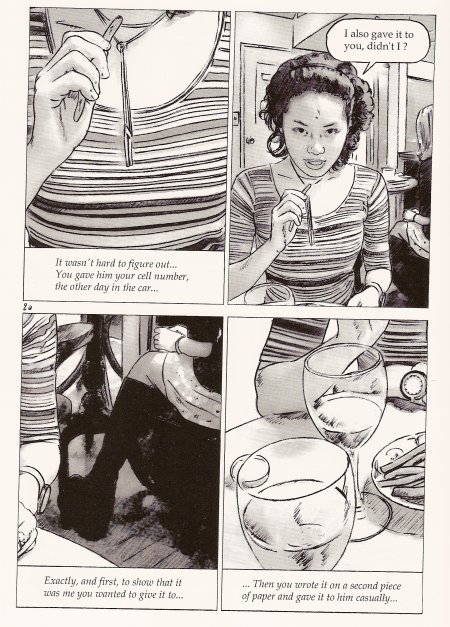 The subjective perspective is reinforced in other ways. Boilet’s speech is shown as captions rather than balloons, like a narrative voice, but one who is speaking to and with the characters in the panel. Sounds plays a role in a scene (page 31) where a repeated pair of sentences is at first shown with ellipses and only a word or two, but, as Boilet moves forward towards the sound, more words are shown until the complete sentences can be made out. It’s a rare and novel use of aural perception in a comic.

He does–though only occasionally–show himself. In one longer scene we see him with Yukiko reflected in a mirror, which maintains the perspective, but there are other times were we see Boilet from the outside. This is not bothersome in itself when one is reading, but on rereads, the disturbance of the perspective–for scenes that I don’t see offering any real purpose–irks me for its lack of consistency. This book is so much about the gaze of Boilet–the artistic gaze on the world around him, the erotic gaze on Yukiko–that the break from a rigorous adherence to this gaze lets me down in some small way.

Besides the perspectival first person gaze that is evident in the comic, there is also the artistic gaze that makes up the metafictional aspect of the book. Throughout the book we see full page excerpts from Boilet’s daily calendar where he writes notes and sketches. These pages not only serve as date markers for events in the book, they also add a layer of the story of the story. They create the illusion (though, again, it may be true/autobiographical) of life being represented by art. The creation is seen as it is created. A sketch of a hand in the date book on page 12 becomes Yukiko’s hand on her collar on page 13. The notes precede the comic, yet the story precedes the notes.

In one page, Boilet captures himself sketching within the story. Three panels of a street in Japan where Boilet waits for Yukiko transitions to a final fourth panel of his pencil sketching the same scene. Like the mirror scene this turns the artistic gaze back around. It’s a beautiful page. 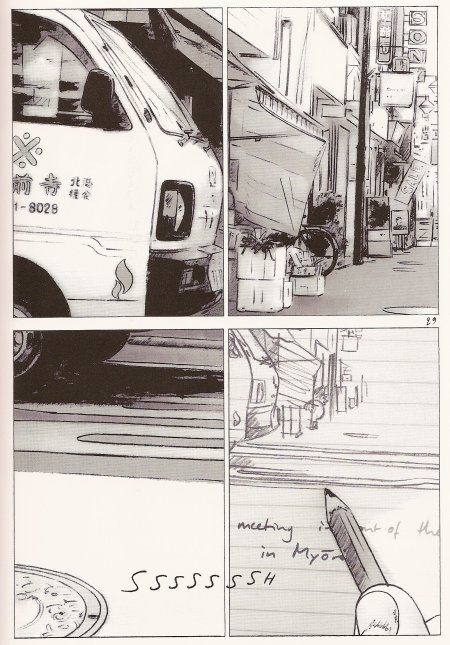 Towards the middle of the book, Boilet asks Yukiko about making a comic about her, and then a few pages later he is working on an earlier part of the story on his computer when she calls him. A circular movement is created by this looking back upon an earlier page of the book. In a similar sense, the opening scene includes a voice over that only later in the book is seen in its right context. This voice over is repeated again at the end of Boilet and Yukiko’s relationship. These three repetitions hold the beginning, middle, and end of story together in an almost circular pattern (they also, importantly, hold the key to the title of the book). The epilogue to the book, where Boilet meets another girl, almost a doppelganger for Yukiko, also has the air of a repetition. In different senses, everything is repeated, multiple times.

Boilet’s art is photorealistic. There is a definite sense that he draws from photographs. It adds to the autobiographical/first person aspect of the book–I think a more caricatural style would be hard to pull off and retain the sense of looking through another’s eyes–but it can also be a bit alienating. I feel like there is a certain expressiveness lost in the drawings. They are impressive but cold.

The page layouts are almost all regular: three, four, or six identical panels per page. There are the occasional variations but always with rectangular panels and no bleeds. This is in great contrast to the manga that is evoked by the “nouvelle manga” appellation. On two occasions he overlaps panels, both are at the conclusion of sex scenes, an effective place to have larger panels breaking out of bounds.

It took two reads for me to start to appreciate this book for it’s formal aspects (mostly the first person view), but the story itself doesn’t really do anything for me. There is little sense of emotion in this fleeting relationship. We know it’s going to end before it even starts, and in the epilogue, Boilet meets another woman. We learn little of the characters, and one gets the sense that Boilet’s interest in Yukiko is mostly physical, particularly visual.

Boilet worked with Kan Takahama on a sort of sequel, Mariko Parade, which I reviewed back in August of 2005. At the time I hadn’t read Yukiko’s Spinach so now the connection becomes more clear. In my review I mentioned: “It is interesting that Takahama, a young Japanese woman, ends up writing the story from Boilet’s perspective rather than Mariko’s, a young Japanese woman. Her sympathy with Mariko’s character allows her to leave more of her subtle and unsaid, while showing us more of the Boilet character directly…” and I recently read a review by Shaenon Garrity of Mariko Parade, which discusses the relation of this book to that one. She notes: “In fact, Takahama’s contribution changes the entire context of the Boilet sequences. Yukiko’s Spinach was about Yukiko/Mariko. Mariko Parade is about Boilet’s fascination with Yukiko/Mariko. That’s a crucial difference. The artist’s gaze takes an extra step back, and is now looking at the artist himself.”

While I agree that Mariko Parade does take a step back from the artist’s gaze, I don’t agree that Yukiko’s Spinach is about the woman. I see it (through the eyes of Boilet) as being about his fascination with her and how he makes it into an artwork. In fact, it’s hardly about her at all (does he not immediately substitute her with someone else?).

Either way, both are interesting if not completely successful works, Yukiko’s Spinach in particular is a great example of the first person perspective in comics and, for that alone, worth reading.