Pascal Blanchet’s White Rapids is a most unusual book with a sharp visual style and a story that is unlike just about any comic you’ll find. The book tells in brief the history of the town of White Rapids, Quebec. The town was founded in 1928 by the Shawinigan Water and Power Company to house the workers and their families who would run the dam of the same name in northern Quebec. SInce the dam was so far from “civilization” the town served as the workers’ impetus for working, moving, and living there.

Blanchet tells the story with broad narrative strokes, only rarely slowing down to focus on specific events or scenes (the chairman of the board deciding on starting the project, the workers hearing about the dam’s closing, a husband and wife leaving as the town closes). No human protagonist serves to direct the reader through the history, and, in fact, only two or three names of people are even mentioned in the story–and then only once each. This is more like an encyclopedia article than a novel, as if Blanchet read about the town and felt that he could draw out a story and emotions from this impersonal collective narrative. This isn’t necessarily bad, just different than what the character-based works mostly seen when dealing with historical comics (Maus or Louis Riel for example). Blanchet pulls it off decently, though that is mostly through sheer visual power. The narrative is just too abbreviated. When he spends time on a scene (both the opening and closing of the book) the work is extremely effective both visually and narratively. One wishes the book were twice as long so the middle of the work could have been expanded in the same way.

Blanchet’s art is reminiscent of fifties modernist design and animation with its geometric shapes, flat colors, and a shifting sense of perspective. If nothing else this book is a visual delight. The color palette is limited to a selection of muted oranges, browns, and grays that also feel out of time. The art is so shape based that it has the appearance of being a collage of paper cutouts, though Blanchet surely did this on a computer (if he didn’t… well, damn, I’m even more impressed). The flatly colored shapes are layered on top of each other for shading and tone variations, creating a certain tension between flatness and depth. This same tension can be seen in comparing manmade and natural landscapes in the book: 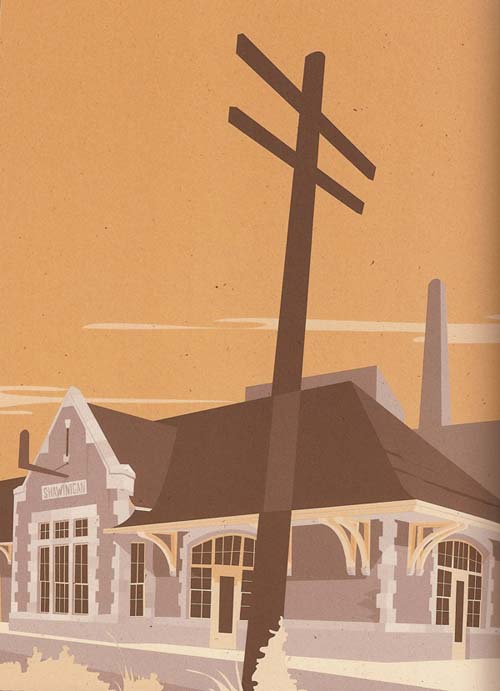 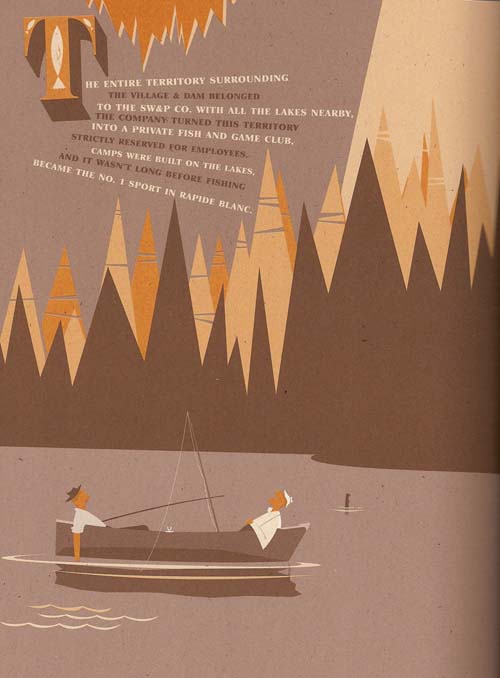 The building is drawn with a strong linear perspective, which is used often in the book for buildings and rooms. The background to the lake scene, on the other hand, has a more atmospheric perspective of overlapping and receding size.

The pages of White Rapids are panel-less, generally one large image per page (or a single image across the two page spread). The composition of these images is often brilliantly done. Color, line, shape, and text are all used to move the viewer through the image and along to the next page. For instance, this two page spread: 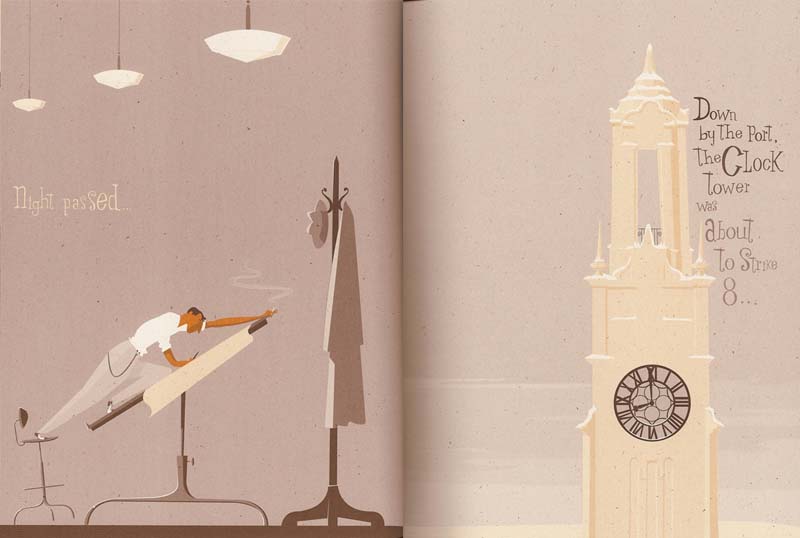 Look at the strong diagonal that leads us along from the stool along the architect and his desk to the pointed top of the coat rack and then to the similarly topped building on the next page, which takes us down along the building and the words to the clock, about to strike. Even the curl of smoke on the architect’s cigarette serves the composition. Similarly the first example above makes use of strong vertical points (utility pole and whatever that Washington Monument-like structure is in the background) and diagonals. In particular here, we see the linear perspective made use of not just for depth but to lead the eye across the page (note the yellowish sidewalk which starts small on the left and opens up at the right where we head off to the next page). There are pages like this throughout the book which showcase Blanchet’s skilled use of composition.

These also serve as a limited example of the use of text in the book. Text is not just blocks of narration, but signs, ribbons, banners, posters, notebooks, newspapers, maps, sound effects, labels, as well as floating text that integrates into the compositions as spoken words, narrative text, and directional cues. The text is colored in different ways for effect (two different colored lines for two people’s brief dialogue) as is the direction and size. There are no word balloons to be found. Blanchet’s text/image interaction is even more integrated than most comics that rely on the traditional narrative caption or word balloon. There are so many interesting uses, I wish I could scan them all. Here’s a brief one. You may find the text hard to read (“Under the village bridge lurked the General”), which is partly the point, mimicking the murky depths of the river: 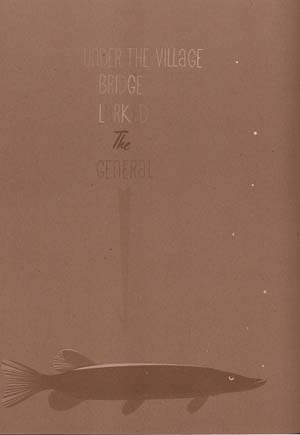 The whole book exudes a sense of the fifties, both visually and for most of the story, a time period that would match the heyday of the town. The optimistic outlook of the town built for happy workers by the company feels out of time in this day and age. The only real dark spot is when the history moves into the late sixties and early seventies and the dam is automated, the workers relocated, and the town shutdown. Even then the workers are given new jobs in other towns and there is only the wistfulness of leaving home behind. The whole feel of the book is so out of time one could almost believe it is a lost treasure from the past.

I’ve seen almost no mention of this book anywhere. Maybe it just dropped below the radar. While the narrative will not rank high in the year’s releases, the visual execution is worth a few times through the book.