Oliver East walks around England (Manchester and its environs), from train station to train station, trying to follow the tracks as close as possible. Trains Are… Mint is his recollection of these walks. I say recollection rather than “record” because according to a recent interview:

I don’t make sketches and I don’t take a camera. I take extensive written notes, but only stuff that I think along the way. I never take any descriptive notes of how things look…But what I do is walk, leave it a month or two so until my memory is a bit hazy and then I draw from memory. But then I try and make it look how I remember it.

This work of memory and the abstractions of East’s artwork make for an elliptical narrative. The, so far, five issues of Trains Are… Mint are written in the moment without any great amount of narrative set-up. For a American like me, it took me some research to even figure out where East was walking (though the intro to the new book spells it out for you). He writes the text mostly in the present tense: a first person narration that only occasionally delves past comments on actions and scenes. East keeps a careful distance between his real self and the narrator of the comic. He makes this distance explicit at a few places: “Sorry, let the mask slip.” This is no diary autobiographical comic, rather it is more like a travel guide/written tour? (something 18-19th century esque). East’s character is not absent from the narrative, but you don’t read this as a “this is all about me” sort of comic. The brief glimpses into East’s character and life outside his walking trips are part of the elliptical nature of the work. But there is also a tendency to breakdown the narrative into discrete moments. Where one image fits in relation to the previous is not always clear on any more than a simple timeline of “this, then this, then this.”

The art in Trains are… Mint is ever changing and evolving. East is finding his way as he goes, his stylistic work nicely mirroring his walks. Certain effects and stylistic devices are more successful than others, leading to an ongoing tension between the “oh wow” moments and the “err, not quite” moments as one reads through the volume. In the end, and increasingly over time, the impressive parts tip the scales (particularly by the time one gets to the most recent issue 5). East is unafraid to experiment with the way he represents his walks and often comes up with exciting and novel visual narrative methods. 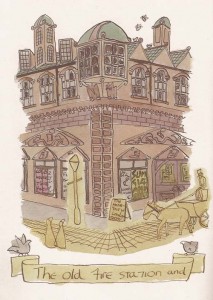 Like most comics, East’s work exists in a fluctuating space between representation and abstraction. Unlike most comics, Trains are… Mint does not stake out any single point in that space. Depictions of certain buildings and landmarks can be detailed and recognizably realistic (albeit in a non-photographic sense (see above)), while other images veer into incomprehension. The highly abstracted images add a level of surreality to the proceedings that keeps the reader aware that the narrative is not a simple journalistic recording.

This place outside strict recording is also found in the occasionally bleeding of fantasy and imagination into the images. No squiggly outlined panels or narrative captions prepare the reader, when East depicts himself on a pathway seeing a female runner approaching. In a series of rather disturbing panels colored with a red background, East depicts himself attacking and brutalizing the women in various ways, evoking the aura of suspicion and fear that pervades certain isolated encounters with strangers. That East puts himself into the role of attacker, where elsewhere he narrates his fear of certain encounters with strangers (but not visualizing them in such a way), is as much an insight into his psychology as anything else we are told in the comic (though what it means, I am not prepared to say).

Repetition of images is a common device, depicting the same image six or more times, often creating a sense of slowed time passing, or, in conjunction with a single moving element (such as East moving across a landscape), tracking a small part of the time and distance travelled. These images also evoke the boredom of repetitious landscapes or cookie cutter buildings. 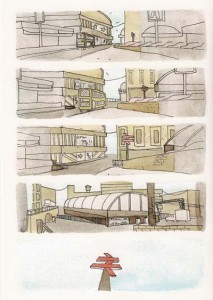 In contrast to the repeated panels are sequences where the reader sees through East’s eyes as he moves through the landscape. Page 116 (above) shows us the world ocularized through East as he walks along a street. These are some of my favorites scenes in the book. Like the repetitious panels, they add a more direct visual narration of the walking experience. In other sections an even clearer use of ocularization puts the reader inside East’s viewpoint. We see leaves and empty cans on the rode under the canopy of a sweatshirt hood. This use of the viewer’s clothes is a much more direct indication of the so-called “first person” viewpoint.

The watercolors add significantly to the aesthetic pleasures of the art. East’s ink lines are often uniform and slightly schematic, but the watercolors effectively take an abstracted shape and make it a brick wall or a field of grass. The colors add depth where the lines forsake traditional perspective (which East does use frequently) and show the changing light of the day as the walks progress.

The text in Trains are… Mint is never confined to simple caption boxes. It is written over images, into images, above images, below images, anywhere on the page. East puts a lot of text into his images as part of the representation of a scene: graffiti, advertisements, and signs, for example, but he also will replace this represented text with narrative text directly embedding narration into the narrated scene. The lettering itself is rough, one of the areas where more careful laying out would aid the overall work immensely. 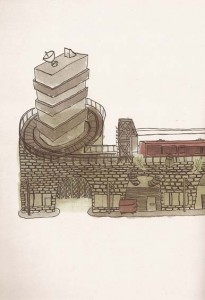 The use of panels and page layouts is extremely varied through the work, from a time-stopping single page image to a page covered with small panels of various sizes. The early pages use a lot of single image pages, showcasing particular landmarks. Wide panels are used frequently as befits a comic of landscape images. The shift to smaller and often more traditional layouts (six or nine panel grids) tends to be reserved for a closer following of movement, time, or repetition. The pages are filled with panels, text, and color, only in issue 5 do we find East experimenting with a more airy, open page: showing a building or two and cutting away anything surrounding it, or floating a single softly delineated image in the middle of the page. These pages are quite striking in their isolated imagery (see above) and create a sense of more leisurely pace.

While East is often successful in his work, he is less successful when drawing people. He seems undecided on how he will draw people and varies the style greatly from a more realistically proportioned and rendered figure to the completely abstracted. The more abstracted are much more successful and seem to fit better with a work that is predominantly landscape–they are small elements of a larger scene. The more realistic figures often look flat and awkward in general and in comparison with the landscapes. This improves over the course of the issues, perhaps as East feels his way to a style that works. One really interesting scene in issue 5 that works around some limitations has East coming upon a large scary man at a train station. We know this not from any figural representation of him (the only images of the man as a whole are very small and abstract), but from the close ups East uses of three tattoos and the large text used for his words. The images of East on this page are reminiscent of the “super deformed” style one sees in manga, a shift in style for comedic effect. 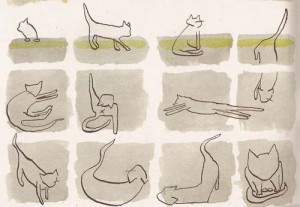 (Just for fun, I love this little sequence.)

Blank Slate’s new edition collects Trains Art… Mint issues one through three in a hardcover volume just slightly larger then the minis (6″ x 8″). The book is of a simple minimal design marred only by a poorly chosen cover. The cover image does not show East’s work at its best, especially when so many more attractive images are to be found within the covers. Over the course of the three sections of the book, one can clearly see East’s increasing skill with both his materials and form. And it is even clearer in Trains Are… Mint #5, which East released hot on the heels of the collection. I’m looking forward to seeing where he goes next. In the meantime, check out his blog for bits and pieces of forthcoming work.