If the reader takes Oliver East’s comics at their face value (and I do), they are autobiographical accounts of walking. In issues 2, 3, and the forthcoming 5 (of which I have a 12 page preview) he walks around parts of northwestern England following the train tracks from station to station, town to town. Issue 4 involves his walking and camping around Norway. They are written as a travel journal with a combination of commentative narration and visual reportage. Each of the books that I’ve read are shorn of any context as if East has no real interest in editing his narration for the reader. Issue two starts in the early morning with: “6:45am I’ve got to do this stretch, from Lostock to Horwich and then on to Blackrod, blind because my A to Z Manchester and Philip’s Lancashire street atlas don’t match up” and a dark image of a man walking along some kind of overpass. Issue three starts in a train station and moves to the streets. Issue 4 also seems to start in media res, taking a few pages to even mention Norway. Places (towns, train stations) are constantly mentioned in the text, and East references his atlas a number of times, yet for all this locative concern, the reader is bereft, forced to follow along with any bearings. This isn’t an unusual place to be in a diary comic, and while Trains Are Mint, isn’t exactly a diary, it has the elements of a first person documentary and occasionally exposes the inner life of the narrator/artist. As an autobiographical comic it is a refreshing change from the relationship comic (a la Jeffrey Brown), reminiscence of youth (a la Chester Brown) or the day-to-day slice of life (a la Kolchalka). For Trains Are Mint is as much about East as a person as it is about the places he walks through. In both cases it isn’t about much at all. I love it.

The way East tells his non-story is what makes his work so interesting. The artwork is simplified, a thin line that outlines and flattens, letting the reader identify without an excess of detail. At times these images veer into unrecognizable abstraction but only rarely and with a certain aesthetic quality that lets the image exist purely as line and color without a concern for fitting it in too clearly with representation. His way of drawing lines of trees (forests?) is really interesting. They are flattened like a green wall of vertical posts and crisscrossing branches like chain links. The abstraction is extreme and the effect is wonderful. Filling out the artwork is what I assume are watercolors, which gives the comics a softness, pale and warm. The combination of the linework and the watercolor adds the handmade, sketchbook/journal aspect of the work, a perfect fit for the narrative. In an uber-detailed, slickly colored style the content itself would feel very wrong.

The watercolors remind me of a more traditional landscape style of painting, which fits with the predominance of landscapes in these comics. The majority of the panels are–or appear to be–first person viewpoints. These images let the reader follow along with East on his walks and are the most successful panels. He has a good eye for composing the images (cropping what he sees?) and making use of the varying panels sizes. Take note of the two pages below from issue 3. The first page has long wide panels showing the side of a road (grass? trees? bushes? a field? it’s hard to say, but it doesn’t matter) and adding to the sense of space, limitless walking with little variation. The second page uses the smaller tighter panels to show a walk done a staircase and closer attention to the area. 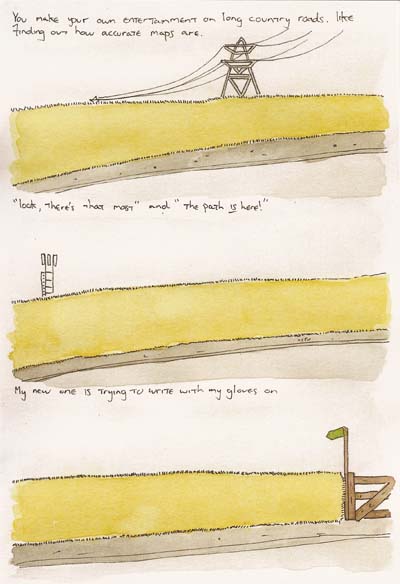 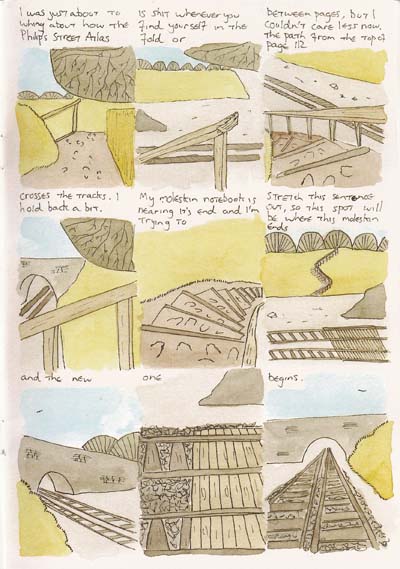 There aren’t many comics that are so focused on landscapes and this is a refreshing aspect of Trains are Mint. It’s one thing that really draws me to East’s work.

East is less successful when drawing people. He seems undecided on how he will draw people and varies the style greatly from a more realistically proportioned and rendered figure to the completely abstracted. The more abstracted are much more successful and seem to fit better with a work that is predominantly landscape–they are small elements of a larger scene. The more realistic figures often look flat and awkward in general and in comparison with the landscapes. This improves over the course of the issues, perhaps as East feels his way to a style that works. One really interesting scene in issue 5 that works around some limitations has East coming upon a large scary man at a train station. We know this not from any figural representation of him (the only images of the man as a whole are very small and abstract), but from the close ups East uses of three tattoos and the large text used for his words. The images of East on this page are reminiscent of the “super deformed” style one sees in manga, a shift in style for comedic effect. 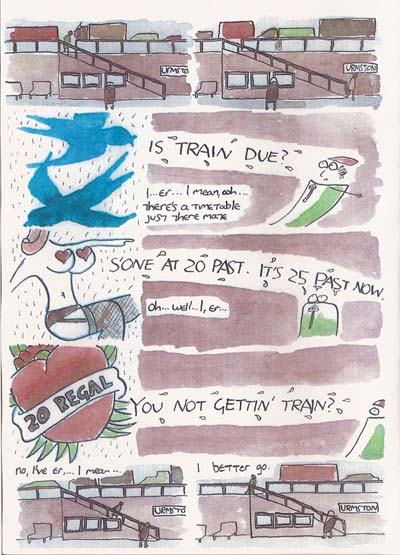 East’s handwritten text is at times hard to read, but again adds to the immediacy and journalistic element of the comics. This could be tempered with a more careful formatting and placement of the text, which often looks a little too haphazardly placed (irregularly overlapping images, uneven spacing). While the majority of the text is narrative caption above or under the panels, he also makes use of signage in his images to place text, sometimes his narration, sometimes reproductions or commentary on the original sign’s text. Graffiti makes numerous appearances–it seems to be one of his preoccupations in his walks–adding an interesting textual college to the mix.

While I have a number of negative criticisms of Trains are Mint, I do so because there is so much I like and so much potential to make it even better. East’s work is clearly improving from one issue to the next and even at his worst is producing unique comics. You can order issues 1-3 from his website. Issue four tells the story of his walking and camping around Norway and can be read in its entirety online. It’s my favorite of the lot and has typeset text and more single page images that gives it a kind of storybook appearance. Take some time and read it, really. You won’t be disappointed.

Word came recently that Forbidden Planet will be publishing a collection. I look forward to it.

As an addendum, I love this page from issue 3, which is a good example of a more abstracted figuration (and a damn funny page): 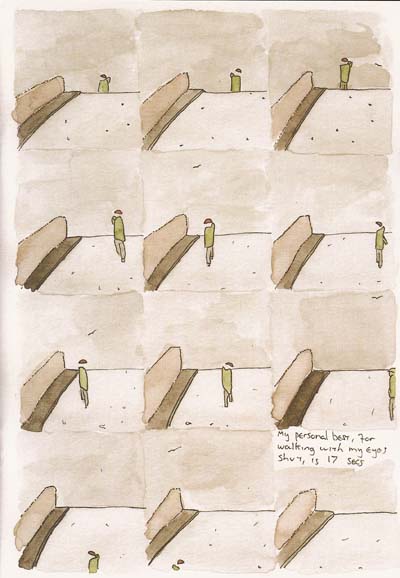