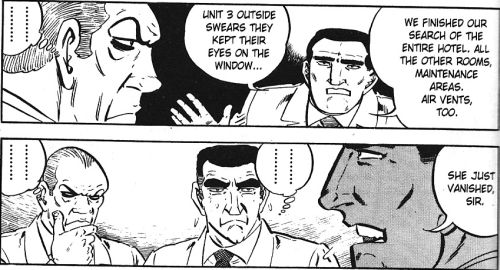 Matthew Brady posted these panels from a Golgo 13 manga. He decided that the meaning of the ellipses in thought balloons means “this character is thinking very hard about the situation, but we’re not privy to his thoughts.” I wonder if it could be an obscuring tactic which foregrounds the idea that we don’t know what these guys are thinking, a kind of focalization technique which keeps us outside certain characters’ heads. Or it might showcase the idea that the men don’t know what to think, they are thinking nothing, or have settled on know primary thought. Any way, it’s an odd tactic, but one I’d like to find a use for.