Back in 1974, long after the disappearance of EC and shortly after the heyday of the underground comix, the direct comics market was just developing. Marvel and DC really were the only games in town, and into this arena the first issue of Jack Katz’s The First Kingdom was published by Bud Plant. At the time, Star*Reach, a science fiction and fantasy anthology, was the only other independent comic being published (the first issue having come out earlier that year), preceeding both Sim’s Cerebus and Pekar’s American Splendor by a few years. Katz envisioned the book as a single novel. He put out a new issue about every six months, ending the story with issue 24 in 1986.

Century Comics Group (though this book was published under its former name Mecca) is now releasing The First Kingdom in four volumes, each containing six of the original issues. As of this writing, the second volume is forthcoming, with the third being solicited. 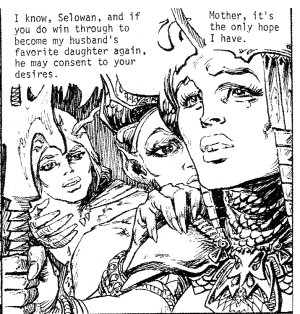 To try to briefly summarize the story of even this quarter of The First Kingdom is futile. Katz created one of the densest comics I’ve ever read both in content and visuals. The beginning introduces us to the idea of a man made cataclysm that altered the Earth and left behind a few survivors, robbed of all civilization. The protagonist for the early issues is Darkenmoor a hunter who loses his tribe and begins his path along a tragic fate, foretold early on by an old seer. His path is quickly crossed by a group of “gods,” who live in a civilization atop high mountains. Darkenmoor gathers other people, fights monsters, and founds a city-state. The jealousy of his brother-in-law and a fallen god work against him, while a goddess attempts to work in his favor. His son is born and must be hidden away on an island, while the brother-in-law takes control of the city-state. And that’s just the really broad elements (without giving away too much).

One would not go off course to think of Greek myth, epics, and tragedies. Katz’s story runs very clearly in the same vein as ancient Greek literary works. Like the epic of the Iliad, he tells his story with a large cast of characters and jumps about between characters, scenes, and times, focusing more on the bigger picture than any single character. Like an ancient tragedy, characters and gods interact and fight against their unbeatable fates which invariable bring death. Like the Greek myths, the gods display human emotions and pettiness. Like these works, Katz’s story has a didactic core (that is not yet clear in this quarter).

For these reasons, the comic is not a simple sword and sorcery tale, though at first it certainly seems like one. Katz’s story is an epic on many levels, spanning (even in this volume) centuries. As such it often forsakes smaller scenes in favor of large events, foregoes much characterization in favor of showing the larger place of characters in the story.

Narration is a large part of The First Kingdom. Nary a panel passes that is not narrated. In some cases it is a tired redundancy of telling us what the images are already showing, but in most cases it is necessary for the leaps of time involved in a great many of the panel transitions. Oddly, Katz uses typeset text exclusively in the comic. All narration and dialogue is set in a rather boring typewriter font on a white background with no borders. The dialogue is not put in any balloons, just set above the characters’ heads, usually at the top of the panel, which visually mixes it with the narration. That said, I never had trouble differentiating the two when reading. Only after reading the whole book did I realize that the narration is in all caps and the dialogue is not.

The sheer amount of text is not the only element that creates the visual density of Katz’s pages. His page layouts neglect the use of gutters. All the panels are divided from each other by a single shared border, as if he had no space to spare in cramming panels onto each page. Early on he puts a lot more panels onto a page, often causing confusing as to the sequence of reading, but by the end the panels are larger and clearly organized. There is no use of any recognizable grid, Katz seems to come to each panel deciding its size without regard to any preconceived layout. 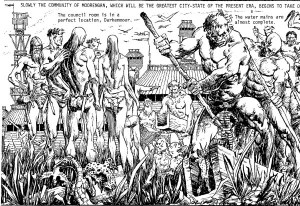 A typical crowded panel (one-third of a page). Click for larger.

Within these crowded together panels, Katz’s art adds even more density to the page. He uses a great quantity of lines to fill the panels, crowding in characters, background, and all manner of creatures. One of his panels holds the amount of lines and visual information that most whole comics pages lack. The lack of color or even much use of spot blacks creates a visually uniformity across these crowded pages that requires attention. The attention is worthwhile, as Katz’s art is impressive if often grotesque. 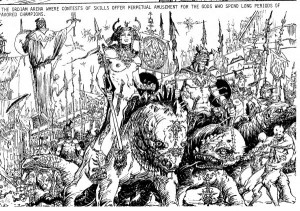 Another crowded panel featuring some of Katz’s monstrous creations (one-third of a page). Click for larger.

The human figure is a particular focus of Katz. The comic is filled with figures, hardly a panel lacks one and often contains dozens. The denizens of this post-cataclysmic land do suffer a certain uniformity of stature: muscular yet bone thin. Clothing too seems to have been a victim of the changing Earth. Most of the characters go about naked or nearly so, though not in a sword and sorcery chainmail bikini way. Rather, the figures lack the blatant eroticism of most fantasy art, and are more often than not slightly grotesque in shape. 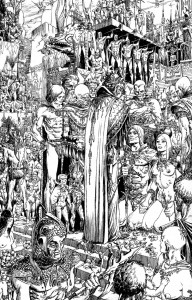 When I started reading the book I was quite put off by the story and art, but I stuck with it, plowing my way through the text and images, becoming more immersed in the story and its world. Katz weaves together a number of storylines, cutting back and forth between different characters with great frequency. At first, I was often hardpressed to differentiate the characters and keep track of the goings-on, but by the end I not only understood what was happening, I wanted to find out more.

I can’t imagine where Katz took his story (though some images I’ve seen indicate the book becomes more science fictiony), but I’m curious to find out. It’s clear that he had a seriousness of purpose and a plan. He wasn’t just making it up as he went along. Even as early as page six, Darkenmoor is granted a vision of his fate. The panel showing this vision has a number of scenes that we see come to pass over the course the following issues.

Century’s reprinting of the comic often suffers from a graying of the art. The blacks are not quite black enough and the whites are often a little grey. Hopefully this will be rectified in the next books, I didn’t find it too hard to fix when scanning the samples above.

I’m not aware of any comic like The First Kingdom. As it began so it remains, standing alone, with few peers.