I was over at the Digital Comics Museum, grabbing some Jesse Marsh comics. While, checking out some of the most downloaded comics at the site, I found these examples of the classic visual trope of the narrating head, in Phantom Lady #22 (Fox, 1949) (I assume the draw of this issue is the Matt Baker art earlier in the issue, though the examples below are listed as unknown in the GCDB). It’s one of those stories where the star character of the book is telling a story she is not featured in. 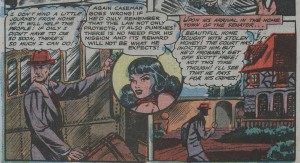 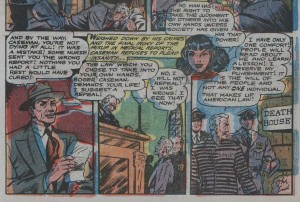 The narration by the Phantom Lady could have just as well been done by an anonymous narrator, as so many of these comics have them already. One wonders if the inclusion of her is just to connect this story to the rest of the stories in the pamphlet. Her narration is impersonal enough that no effect would be lost, from a narrative standpoint, if she were removed from the story. It is interesting that her narration is shown as both narrative captions, through most of the story, and speech balloons, where her head is shown.

I just wanted to post these examples for future reference, so if I need an example of this I don’t need to go hunting it down. You don’t see this style of narration in comics very much anymore.