This book has been hidden in one of the “to blog about” piles for almost two years. I read it once and then never got back to rereading and writing. My previous exposure to Kindt’s work was his awesome Super Spy: The Treasure, which was a small box of individual panels with a map to help lay them out (scroll down a bit) (Oh, and look you can read it online now!). This Super Spy is 336 page comic about spies during World War II.

Kindt is a formalist working in a traditional genre. These are spy stories with secret codes, double agents, assassinations, and even a few gadgets, but these stories are far from straightforward narratives. Nor does Kindt offer a James Bond-esque glamorization of espionage. Through a diverse series of 52 interlocking narratives, Kindt shows us the spy’s life and death. The portrayal is not completely bleak, but there are few happy endings. Violence is pervasive and swift. Kindt evokes empathy for many of the characters, those struggling to get along in war torn world, often forced to work for governments to keep their lives. Plus, it’s an entertaining read that requires enough thought and engagement to make it more than a simple genre entertainment. 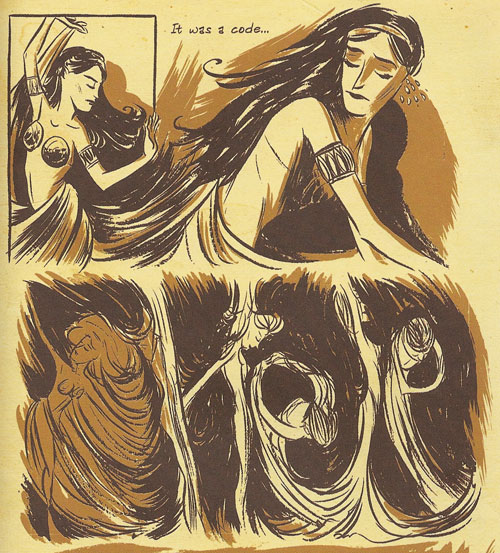 A wonderful loosening of the drawing to accompany the dancing.

I say Kindt is a formalist for two reasons. For one, the narrative organization of Super Spy is complicated. A note on the indicia page, tells the reader that the chapters are purposefully ordered non-chronologically, but that it is possible to read them chronologically by using the “dossier” numbers attached to each chapter. The numbers are not simply 1,2,3’s, so the reader wishes to get the chronological experience would probably have to do some calculations. The non-chronological organization is highly effective and a propos for the content. In a story filled with spies and espionage, the organization keeps the reader in an expanded state of unknowing. The pieces come together at varying times and with varying amounts of clarity. You have to pay attention to the characters to get the full effect out of many of the chapters. I appreciate that Kindt expects the reader to work a bit in reading the book. 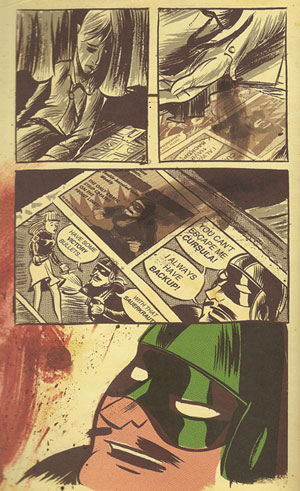 Note the shift to a colored image.

Visually, Kindt offers a surprising amount of variations in the artwork. While many comic artists are comfortable altering the art for some kind of “story within the story” moment, or drawing flashbacks in a different color, Kindt simultaneously manages to keep a consistent style while offering a plethora of visual variations. One chapter is drawn with black lines and a coffee colored wash, except for a single color panel. Another chapter is drawn with black and a solid blue-gray except for one final panel drawn with many colors. One chapter is drawn sort of like a newspaper comic. One chapter intersperses children’s book illustrations into the story. Most of the chapters use black and one color, though that color varies at times. Photographic images of notebooks or postcards make appearances. Some chapters have large blocks of texts, while others are mostly silent. At one point a blue color drawing of a photograph appears in an otherwise brown colored chapter, and the careful reader will note this photo appeared in an earlier blue colored chapter. These little variations add spice to the book and emphasize the different characters and perspectives that the narrative takes on. 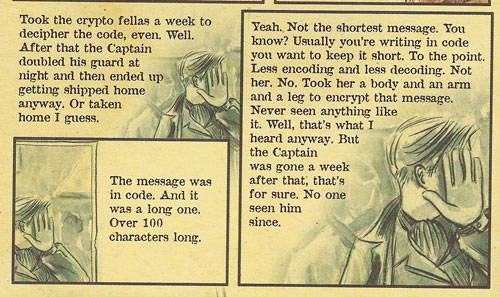 One of the more text heavy chapters, here making use of a repeated image of an spy whose identity is unknown.

Kindt integrates all these little variations so skillfully with his narrative, that you don’t give them a lot of thought (except for one or two really blatant ones, like the pages done like old comic books pages (tattered paper edge and all) that forces you to turn the book sideways). This makes it easy to overlook how impressive the book is from a formal perspective. You can breeze through, enjoying the story and not really taking in the skill. At least, I did, my first time through. Second time, I started noticing a lot more. 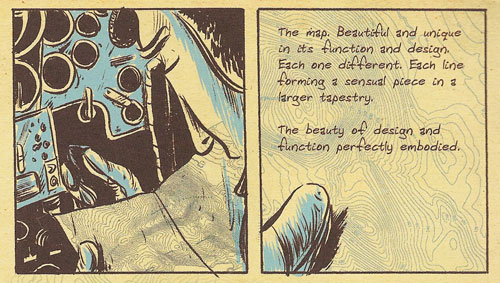 Love the topographic map in this one.

My main quibble with the book is that a lot of the characters look too similar. I don’t think this is a purposeful attempt to further complicate the narrative (though I could see how that might be done), but rather a limitation of Kindt’s figure/character design. His style is often loose and sketchy, which works great for backgrounds and objects and action, but it misses the mark a bit when the story requires the reader’s ability to infer who is who at any one time.

I’ve thrown a few images into this post that I liked for various reasons as I flipped back through the book. No analysis for now, maybe another time. I need to look up some of Kindt’s recent work (he’s got a recent book from Dark Horse and a forthcoming book from Vertigo).

[This is part 14 of a 30 part series where I am writing daily reviews for the month of December.]