More not totally thought out words about things I finished reading.

A short comic with an attractive sharp lined, minimal style that looks like it might be digitized pencil drawings with an extra layer of grey. The grey tones aren’t solid, they show just a little bit of white and texture that make them appear to be hand drawn, an effect I quite like. Drawing with the grey tone is also used effectively for atmospheric perspective. Skillful layout and pacing elevate what is a pretty light story about snow and turkeys that has one spread of a rather jarring dream or vision. Three read throughs and I’m still not totally sure what to make of that particular element of the story. The moment shows a psychology at work that I didn’t see built up to. (Preview and get a copy here.)

Another book (see my previous post in re the Conan collection) with a cover that is just not in accord with the actual contents. The cover makes this look like some kind of cthulhu zombie story with pretty generic artwork. This is actually a rather odd “super” submarine adventure series focused on bizarre not quite natural disasters. The four comics included were originally published between 1962 and 1964 by Dell comics and are all drawn by Sam Glanzman (who I’m only otherwise familiar with because of Dan Nadel’s books). The writers are uncredited and mostly unidentified though the introduction posits that the first issue was written by “poet/kabbalist” Lionel Ziprin who probably worked with Glanzman on some other comics. The first issue is certainly the highlight of this collection, and the series mostly goes downhill from it. 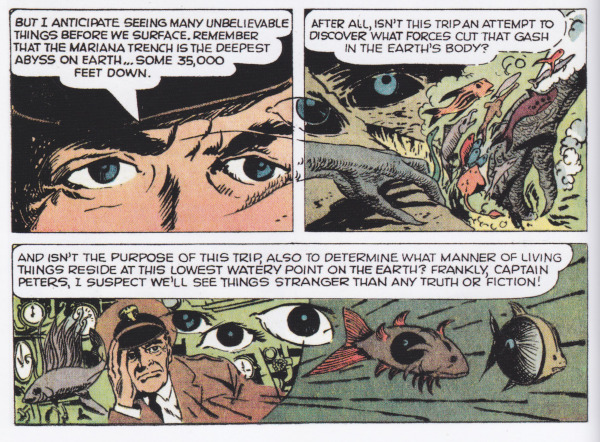 But that first issue is just totally crazy. The Admiral of the submarine has this long vision of the destruction of New York City due to the effect of what “the Enemy” has done in the Mariana Trench to cause sea levels to rise. In a most unusual move, throughout all four of these issues the antagonist is always just referred to as “the Enemy”, never seen, never named, never explained in the even the slightest way (are they aliens? is it a they or a single individual? why do they keep trying to destroy the world via created natural disasters?). I do notice on rereading a panel that shows a mysterious looking clawed glove crumbling a map of the United States, but the sketchy panel borders on that image make it read like another vision not a glimpse of the actual Enemy (oddly, it reminds me of the gloved antagonist in the Inspector Gadget cartoon).

The rising water of the first issue leads to an ice age in the second issue and some kind of anti-matter problem (that one is really not explained well) in the third issue and spontaneous volcanoes in the last issue. In a weird way it could be read as environmental science fiction, disastrous events that aren’t all that off from the slow effects of climate change and other man-made catastrophes (surely “the Enemy” is us). But in this series the disasters are always solved in the nick of time by… a submarine… a submarine with some kind of exandable/retractable casing that always seems to be the right trick for the job. 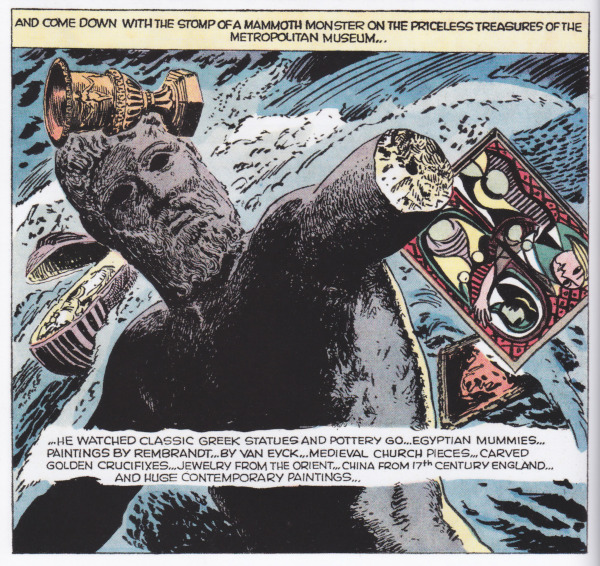 It’s all pretty damn hokey, but that first issue is apocalyptic in writing and Glanzman’s art is in itself visionary, full page images of sea monsters and environmental destruction. Glanzman has a lot of panels that almost look like collaged imagery, a page show a vision of Madison Square Garden being “doomed” by rushing waters features a giant wave of water, stands full of people, a juggling clown, acrobats crossing from one panel to the next, and an overlapping group of boxing opponents… In one sequence a floating eye runs through the gutter from one panel to another.

The collage effect is heightened by Glanzmen’s clear use of photo references and the occasional repeated use of imagery. On one spread you can see the same head of the Admiral reused twice. I’m actually curious how that was done in the 60’s. Maybe he was just lightboxing one page over another and redrawing. They are not exactly the same, but too close to be an accident or freehand drawing.

In the end the first issue of this is really interesting, but the other three have much less interest. Also, the really long introduction by Stephen Bissette is a way too detailed history of super submarine stories and not enough about the actual comics in the book. I’m actually a bit baffled this collection exists at all, probably would have been better as a collection of different Glanzman drawn comics than bothering to include this whole series, but alas the comics audience does love completion, doesn’t it?

A very readable and modern translation of this classic Euripides drama. After reading issue 1 of Sarah Horrocks’ new comics version of The Bacchae (on which more another time), I read this which she mentions as one of the translations she is drawing from.

Other books I’m working my way through:

– Hainish Novels & Stories, vol. 2 by Ursula LeGuin. Nice Library of America edition, been enjoying this set and wishing I had read more LeGuin earlier in my life.

– Luka Rejec on Anti Canon Worlds and the UVG, wherein he talks about rpg settings, canon, anti-canon, and bricolage. I’ve been trying to find a balance in my games between too much pre-made setting and not-enough, and I still don’t feel like I’ve reached that point. The campaign I ran when getting back into D&D was too little setting, then I ran some D&D 5e book adventures which was too much settings, then I tried a self-created campaign in a pre-created world (I used the Dragon Age world, but placed my campaign in a unexplored corner of the map). I’m not happy with how any of them turned out. The first was too open (and also I was still figuring out what I was going in general), and felt too generic and non-specific all the time. The second was just too much, there are too many things to know, and too little room for the GM or the players to invent. The third was too unusually specific in certain aspects that started feeling limiting (primarily the way magic is dealt with in that setting). I’m not sure what I’ll try next time, something that gives more room for the players to invent (if they want), but provides some basic framework to build from.

– Sean McCoy writes about Stop Worrying about Layout Software and whips up character sheet and maps using only fixed-width ASCII characters. It is pretty awesome. Reminds me of the old video games I played on my TRS-80 Model 3 as a kid. I didn’t really have graphics, so a lot of it was just ASCII characters as maps, etc. There was this Star Trek game where you moved the Enterprise around and it looked something like “V” (I think it was one of the apparently many versions of this game). Really makes me want to try this method out, as I never use layout programs enough to be facile with them (as my main experience is using them to layout minicomics, which is primarily just placing an image on a page).

– I mentioned A.S. Hamrah’s The Earth Dies Streaming last post and neglected to the link to the excellent introduction which is free at the n+1 site, so… Remember Me on This Computer.

– This review of an Etel Adnan biography at Hyperallergic is mostly just a good excuse to look at her beautiful, bright abstract landscapes.

– Kotaku has a long profile up about Gary Gygax’s widow Gail Gygax called Fantasy’s Widow: The Fight Over The Legacy Of Dungeons & Dragons. I don’t even know that to make of it, other than that a lot of people get shitty when money is involved.

– Worthwhile read from the latest n+1 on The Korean Peace Process by Richard Beck. We’ve been hearing a lot about this in the news lately, but always shorn of any historical context. I know the only reason I ever even really heard about the Korean War was because of all the MASH reruns I used to watch as a kid.

– Tegan O’Neil and I must have the same reading list, because this week her latest review at The Comics Journal is on Julie Delporte’s This Woman’s Work which arrived on my porch the day before this review went up. I still haven’t starting reading the book yet.