I rediscovered this book on my shelf the other day and realized I’d never written about it. This is one of those books I took a chance in pre-ordering and was pleasantly surprised when I read it.

Salmon Doubts is a story about salmon, slightly anthropomorphized. They don’t live in houses or go to school or have hands, but they do talk to each other. The story starts with eggs and follows the hatching and maturing of the salmon, through to their swim downstream to the ocean and then back upstream to spawn. The protagonists are Geoff and Henry, two salmon with conformity issues. Geoff starts out as fitting in and one of the group, but struggles with his wish to go against the group, while Henry starts out as an outsider and only wishes to fit in.

Sacks’ line is nice and fluid, befitting the mostly underwater scenes and his simpler style. The colors are limited to three at once, though these three colors change depending on whether the scene is in fresh or salt water (darker colors for the salt water). The pages are mostly limited to two panels each, though scene shifts are punctuated by a smaller single panel on a page. Sacks takes advantage of the underwater setting to make great compositional use of the fishes’ ability to be seen in a great variety of angles and relations to each other. The direction the fish swim is often used to propel the compositions in one direction or another. When the fish swim downstream they move from left to right across the panels, while when they are swimming upstream they move from right to left. 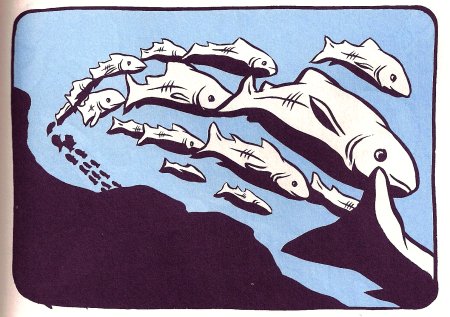 The representation of water is what really jumped out to me in a few panels, both the panels below are nicely abstracted patterns that still retain a feeling of water (in this case one from below and one from above). 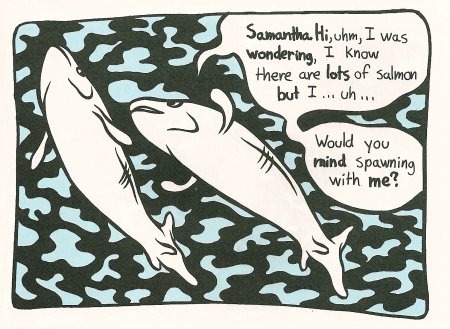 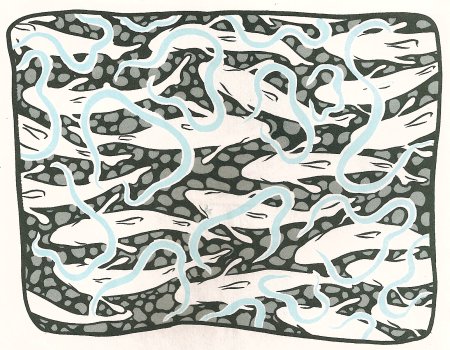 This book probably fell under the radar a lot when it came out. It often feels more like a children’s book than most comics and is the kind of book that would probably appeal to a wider audience if it ever reached them. A well done book that I’ve read a few times with pleasure.