I gave up on going to comic stores regularly over a year ago. Instead I discovered Mile High Comics where I can order from the direct catalog months in advance. Unlike when going to stores, I never miss those obscure comics I want copies of (the stores where I am have let me down), and bonus points in getting a shipment once a month right to my apartment. Anyway, since making this change I don’t find comics by paging through them at the store, I have to read descriptions from the catalog and sometimes search out publisher or creator websites for art samples. I occasionally have to try something new just based on a description that appeals. A while back I ordered RabbitHead. The description talked about formal experimentation, multiple narrative threads, something like that. I am so often let down by the unknowns I try. Not so this time.

RabbitHead is a daring experiment in comics narrative. The story begins with one row of panels going across the middle of the magazine size page. Throughout the comic, all the panels that follow each other in time across pages are connected by a thick black line, a thread to pull them together. The comic starts with the black line coming onto the page and ends with it going off the page (not without reason). There is an inexorable forward movement to the work.

The beginning shows a rabbit-headed woman (dressed in a kind of medieval fantasy garb) at a grave site. She throws down a plant (flower?) of some kind and rides off on her strange horselike beast. As she starts her ride she spits off to the side. One gob hits a tree and another lands in the dirt. At this point the story branches. A second and third row of panels (one above, one below, the original row) branches off with the two gobs of spit. The gobs grow into weird creatures. 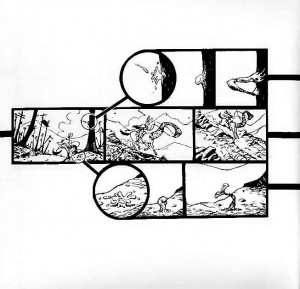 From there the multiple rows of panels, each telling a different branch of the narrative, go on their way, branching further until there are 7 rows that fill the page. As the story progresses the branches integrate back together, one by one the rows disappear until we are left with the single middle row and the rabbit-headed woman. The story grows and shrinks, and in the end we are left with the same scene as in the beginning. The black line travels off the last page and comes back onto the first page.

The formal experimentation here works amazingly well. The artwork is simple and effective, done in black ink and a dynamic line. It’s detailed enough, neither very realistic nor too abstract, rather cartoony (though less so than, say Bone). The majority of the story is made of strange creatures interacting with each other. They grow, eat each other, die. An underlying life-cycle, organic connection metaphor is prevalent. In the end, RabbitHead seems to bring about her own downfall (with a sidetrek for others doing their own damage to her). On first reading I was not too impressed with the story, a bit turned off by the profusion of strange creatures, but the more I think about it, the more the story seems to integrate with the form of the work: the connections, the constant forward movement, the growth and death of the creatures/narrative threads.

I’ve never heard of Rebecca Dart before, but I plan to keep my eyes open for more of her work. This single comic shows a lot of promise for more interesting things to come.