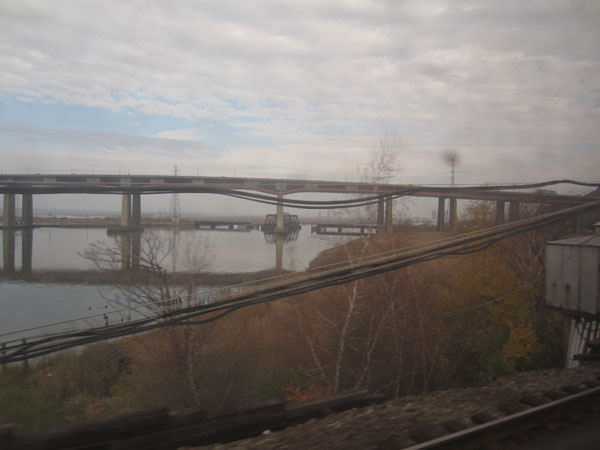 Made a trip up to NYC (via 2 trains and a bunch of subways) for the Brooklyn Comics & Graphics Fest on Saturday. I took a ton of photos on the train, so you’ll see them in some of my comics (already in the comic from 11/10). Before hitting the festival I went uptown to the Gagosian Gallery to see the two Cy Twombly shows they had up.

One show was a room of his photographs. Most were grouped into series, often different views of the same object: lots of still lives, flowers, fruit, sculptures, some trees, some studio shots. Lots of the images had a soft focus, a number were extreme close-ups that distorted the actual subject, though often the context of the series filled in this information. The colors were muted, lots of blues and greens. I’m not sure how they were printed (no wall tags, and I neglected to look at the info sheet), but the prints had a nice texture to them, not your traditional slick photo paper. One really beautiful sequence consists of three images: close-ups of some classical sculptures, a male and a female head (you can kind of see them in images 5 & 8 of the exhibition images). In the second image of the female it almost looks like the sculpture has tears running down the cheek. Also a really nice series of sky and tree tops.

The other show consisted of the last 8 paintings Twombly made. They were all very similar, a bright green ground with large loop-de-loops (like cursive lower-case Ls) in drippy yellow, orange, or red. I wasn’t very impressed with them, they lacked the dynamism of much of the Twombly paintings I love. They were very “big” in stroke/paint as opposed to my favorites of his work which tend to involve smaller mark making and more space.

After that it was off to BCGF. I got there pretty early so it wasn’t crowded at first, but over the course of the afternoon the show got extremely crowded. I started off on the lower floor, and by the time I got to walking around the upper floor there were areas where you could barely get through. Next year they might need a bigger venue (or fewer tables so the aisles are wider). It got pretty hot in there, though not to MoCCA levels. I wonder how the crowding effects sales. On the one hand: lots of people. On the other hand: there were some tables I only really got a glance at from behind other people, so first impressions (covers in particular) were really important for people I wasn’t already familiar with as I couldn’t always get close enough to page through books.

It was nice to talk (some more than others) to a bunch internet friends/acquaintances, though in most cases the crowds kept conversations shorter on the floor (there was always someone else showing up). Finally got to talk to the amazing Dunja Jankovic who is coming down off the international convention circuit. Here’s hoping she starts making some new comics now. I gave out a bunch of MadInkBeard No.3 issues to people. Julia Gfrörer was kind enough to remember that I’d reviewed her comics. Also had some crazy 12% beer (Otter Creek 20th Anniversary Ale) with Ian Harker before heading home.

A highlight was meeting the enigmatic Vincent Giard who was down from Montreal with Colosse. He is not an anthropomorphic animal as reading some of Julie Delporte’s comics might indicate, though there is a lot of beard and hair.

I ended up wandering over to the Knitting Factory after checking out all the tables, and saw part of a panel with Carmela Chergui from Frémok, Tommy Musturi from Finland, Dunja, and Inez Estrada. I was late to the panel and ended up standing at the back, but at least I could have a beer while there (though, when asked if they had any porters or stouts, the bartender could only offer my Guinness, which is disappointing). Carmela, in talking of the work Frémok publishes, describes how one thing they look for is work that they don’t totally understand but that they know something is going on with it (I paraphrase this sentiment horribly), which describes a lot of the work I’ve read from them pretty accurately. It’s never all laid out and explained for you, but it is also never a complete obscurity (or a complete mess). 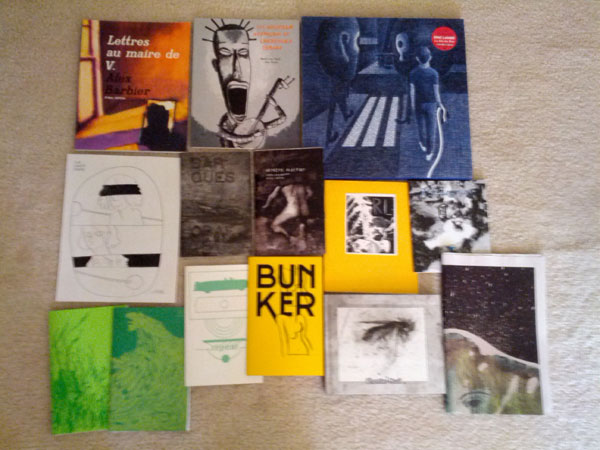 Getting to buy books direct from Frémok was my shopping highlight of the festival. Not only saving big on shipping from overseas, but they were offering a 1:1 dollar:euro exchange which is a great deal. Lots of amazing books at their table, I could’ve easily spent $200 dollars there without any trouble (sadly, so far I haven’t seen any post-bcgf reports that mention them). I ended up getting:

The Lambé book is brand new and is a beautiful big square volume all drawn in ballpoint pen. Haven’t had a chance to read any of these yet.

I didn’t buy many other comics; I wasn’t attracted by a lot of what I saw: a lot I’ve seen before, a lot I can just as easily get online (like from Fantagraphics), a lot that does not appeal to me aesthetically (those messy/grotesque/caricatural/busy/etc. styles that are so prominent). But I am excited for all the books I picked up:

Black is the Color parts 1 and 2 Julia Gfrörer (the print version of the Study Group webcomic)
RL by Tom Hart (which you can read online)
Bunker by Sophie Bédard and Vincent Giard (Colosse)
Alphagraph no.1 by Marie Saur & Nylso (Colosse)
Repeat by Chris Day
In the Up Part of the Wave by Lala (http://www.floatingworldcomics.com/main/2012/10/10/in-the-up-part-of-the-wave-by-lala-albert/)

RL is a heartbreaking work, but Tom has really done a great job with the visuals, the best I’ve seen from him (especially the use of screen tones). The writing (the prose I mean) is also not to be overlooked.

Bunker has an interesting conception. Sophie Bédard drew some thumbnail layouts while drunk and couldn’t recall what they were the next day, so Vincent made a comic based on what he thought the thumbnails were. Vincent gave me the hard sell on Alphagraph, telling me how awesome the artist is. I also bought a drawing from Vincent, one of his 30 Days of Comics pages.

Was super excited to find a new Chris Day comic at the Closed Caption Comics table, as I am a big fan of his photo-referenced, geometric, abstract narrative comics. I don’t see Repeat up at his online store, but maybe it will appear there soon. Oh, and I just discovered his Tumblr.

Jason Leivian sold me on the Lala comic (a big color newspaper like Aidan Koch’s recent Q). I’ve heard her name before somewhere, but I don’t think I’ve seen the work. This one is only slightly narrative (kind of a micro-narrative) and has a nice use of repeated figure movement within a panel/page.

And that’s about it… I enjoyed the show