I’ve always had a love/hate relationship with Roy Lichtenstein’s comics paintings. During the sixties, he reframed and repainted comics panels at a large scale, creating paintings from single panels. While the experience of seeing comic art at such a scale, hanging on a wall, appeals to me, Lichtenstein’s paintings always felt flat and… lacking. Comics aren’t about the single panel. Each panel begs the questions: what came before? what will happen next? Though Walter Mosley, the author who conceived this book, does not mention Lichtenstein in his essay, it is hard to imagine the Pop Art painter didn’t come to mind, especially considering that his “Image Duplicator” (1963) is copied from one of Jack Kirby’s X-Men #1 panels. Maximum FF takes the first issue of the Fantastic Four (1961) and pulls it apart, panel by panel, and enlarges it. The whole production has the feeling of paging through a collection of Lichtenstein paintings, except here, the separate works of art are all connected and sequential and they are the work of the “King” of comics Jack Kirby.For those of you not familiar with this historically groundbreaking issue (I’ll admit this is the first time I’ve read it), I’ll briefly summarize. A signal goes up over the city of New York. Sue Storm turns invisible and sneaks away from her friend’s house. Ben Grimm, out shopping for clothes, throws off his trenchcoat and hat to reveal himself as the rocky Thing before running off. Johnny Storm turns into the Human Torch and flies away (oddly burning his own car in his wake). After some chaos caused by these fantastic appearances in the city, those three gather at the laboratory of Reed Richards. Here the story pauses for a flashback to tell the group’s origin, involving a rocket ship to the stars and transformation by “cosmic rays.” Discovering their new fantastic powers, the group decides they must use them to fight for what is good and right. Back in the present, the group travels to “monster island” where they confront the Moleman and his monsters. Of course, they defeat the Moleman, leaving him sealed below the island.

Stan Lee’s narration and dialogue is his traditional over-the-top style. Every word balloon and narrative caption seems to have at least one, if not more, bolded words. As is usual with the era, the narration and dialogue are often redundant to the images. I read a quote recently from Lee about how Kirby’s images could almost tell the story themselves. I laughed at this, as Lee didn’t seem to take any action on that thought. I found the text overblown and excessive, second fiddle to the art. Kirby’s art is much more naturalistic here than in his later works, but it retains the dynamic compositions and dramatic figure posturing for which he is well known.

Other comics have been drawn as large single panel pages, but in this case, using the original panels’ relative sizes helps retain the pacing of the original story. This pacing is relative to its new scale; everything is slowed down due to the sheer size of each image. You can’t flip through this book. You can’t scan a page for the storyline and move on. You have to sit with it and look.

Mosley’s reorganization of the layouts show that he’s been studying his comics. His variation between the number of panels across a spread and their orientation enhances the story. Certain pivotal moments are given added weight by spreading the panel across a two page spread. In some cases this also involves rotating the images 90 degrees, which forces the reader to turn the book sideways to best view the panel. This forced reader interaction adds to the slowed pace and weight of the book. In two cases fold-out pages are used so a panel can be extended across the width of four pages. The first instance is an image of Reed Richards stretching his body in a long U-shape between two buildings to catch the falling Johnny Storm. With the panel turned on its side across the fold-out, the flexibility of Richards’ body, his superhero power, is emphasized. In the other fold-out, a huge monster rises from a hole in the earth. The panel shows the monster’s claws reaching out of the hole and nearby soldiers shooting and running in fear. At this size, the panel, proportionally rather small in the original, shows the soldiers at the same size as previous close-up panels, and the monster is consequently given the weight of its size with its two claws alone taking up more than a page.

Single panels on a page or blank pages are also used for effect. Early in the story the Thing, called to duty while out shopping for clothes, throws off his trenchcoat and hat disguise. A small panel, centered in a two page spread, shows the shopkeeper fainting and the Thing headed towards the door, saying, “What a relief to get rid of those tight rags!” The Thing is pressed into the small panel and the panel is surrounded by a large margin of white space. The reader, turning the page, is presented by the Thing bursting out of the shop. Glass and wood splinters fly about; two men in suits react with shock. This panel is also bursting out of its two page spread. It bleeds off the top and bottom of the page and leaves only a narrow white margin on either side. The layouts and size of the panels in conjunction with the turning of the page work to dramatize the scene in a way that Kirby never could with his standard comics layouts.

Another two page spread includes four small panels in groups of two that take up less than half of their respective pages. The first two panels, at the top left of the spread, show Sue Storm turning invisible for the first time. After the white space at the bottom of the left page and the top of the right page, two panels at the bottom of the right page show the others reacting in shock to her disappearance, then Sue reappearing. The layout and white space again serve to dramatize the content, the gap of white space, shorn of any image, coincides with her invisibility. One could go on with examples, but I will stop here. 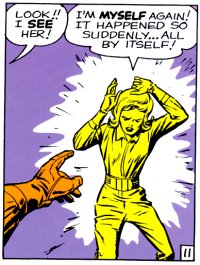 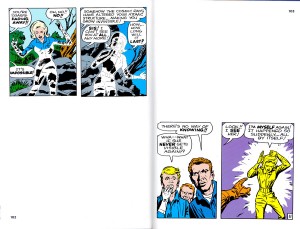 The coloring in the book came as quite the surprise. Being an infrequent reader of comic books from the time period, I can’t comment on how standard the coloring is, but I find it most unusual and interesting. Along with enlarging the art, the color was remastered for this book. The palette is very bright and vibrant, flat and free of any dots or tonal change. The coloring is often not done in any conventional realist way: while the water is colored blue and fire is orange, yellow, and red, a street is colored bright yellow and buildings are blue. This use is much more expressionistic in nature. Background colors add emotion to the image. Figures–clothes, hair, and skin–are frequently colored in a single color. This is the most striking element of the color after the brightness of the palette. A cab driver is offered money from an invisible Sue but sees only the floating bill. He is all yellow in the first panel, then he is orange when he notices the bill floating, seemingly on its own. Shocked at the floating bill and hearing Sue’s voice from nowhere, he is then colored red (with a yellow background to add effect) as he shouts, “I’m gettin’ out of here!” In the two intervening panels between orange and red, the man is colored more realistically, showing that the odd coloring was used for effect (else, why color him realistically for two of the five panels). Even groups of characters are often colored all one color.

The dustjacket to the book unfolds into a two by three foot reproduction of the cover of FF #1. The reverse side shows each page of the comic in its original format, yellowed and faded with age. This reproduction allows one to see the original layout of the pages. Unlike the other Kirby work I’ve seen (later FF issues, his 1970’s return to Captain America), the layouts (short and wide panels, tall and narrow panels) are more variable than his standard use of the six panel grid. Mark Evanier, in his accompanying essay, attributes this to orders to make the book look more like the Justice League comics from rival DC.

Mark Evanier’s essay on the origin and creation of the Fantastic Four is more about the specific creation than any historical context in relation to others comics of the times. A typed draft by Stan Lee of the FF’s origin is included and gives some interesting sexual undertones to the team. The Invisible Girl’s body originally turned invisible, but her clothes stayed visible. To be completely invisible she had to be naked (in a parenthetical, Lee wonders if it will be too sexy in the art). Johnny Storm only turned into the Human Torch when he was “excited,” and only remained so for five minutes. He then had to rest five minutes before he could flame up again when he got “excited”.

Walter Mosley’s accompanying essay is part reminiscence and love letter to the “Marvel age of comics”, part analysis of the Fantastic Four, and part explanation of this book. He discusses the innovation in the characters, their superhero humanity, and the metaphorical possibilities of the work (i.e. the enemies that come from underground in relation to the unconscious). The book itself came about from his desire to recapture the wonder of his childhood readings of the Fantastic Four, which led him to scan and enlarge the comic panel by panel:

When I saw each frame as a unit I remembered something from my youth: as a young person I could completely concentrate on each frame of the comic book. I could see every line and gesture as if it were part of a sole painting hanging in the center of a blank wall. This, I thought, might be what separates me from my younger self. Now I look at the whole page, read far too quickly, and move on before seeing what Jack Kirby saw when he set down his images forty years ago. (82)

This statement, above all, explicates the lesson to be gleaned from Maximum FF. For those experienced with reading them, it is easy to breeze through comics: devouring images, scanning text in word balloons, and flipping pages, but comics, like other arts, are to be experienced, enjoyed, and slowly digested. If we take the time to really see the panels, the images, and the words and the way they interact, we can see new facets of a work, reinvigorating an old favorite or deepening our enjoyment of a new work. Comics are a time-consuming media to create; let’s spend a little more time with them.