Domingos Isabelinho wrote about Frans Masereel the other month at The Hooded Utilitarian, and it got me pulling my copy of Passionate Journey (1918) of the shelf. I have a nice little hardcover from City Lights Books, which I got at the store on a trip there (perhaps in spring of 2000). This edition seems to be out of print now, but you could get the Dover version for a cheap price. I discovered Masereel a little too late, as he would have been huge for me if I’d seen his books when I was studying printmaking in art school. I had fallen in love with woodcut prints, but hadn’t discovered these wonderful Masereel books which have a looser and more expressionistic style than the much more stiff, detailed realism of Lynd Ward. I produced some pitiful attempts at a story in woodcut prints one summer during school, and I can speak from experience how difficult it is. His leftist political slant which bled through in his narratives would have also appealed to some of my (poor) attempts at political artwork in those days.

Passionate Journey is my favorite of the three or four of his books that I’ve read. In rereading it, I appreciate not only the technical skill, but also the narrative itself. The book follows a man as he wanders and lives life. There’s little to be said of plot. He arrives by train in a city, and the images convey his wonder and the pleasure he seems to take in everything: food, drink, dancing, women, buildings, speeches, reading, playing with children, throwing snowballs even. Masereel conveys much joy in his images as the man takes on life with gusto. The “passionate” used in the title is manifest without words, with only the sharp blacks and whites to communicate. The literal translation of the original title “Mein Stundenbuch” is more like “My Book of Hours,” a title which I think would have been better used, as it adds a certain level of meaning to the book. While Masereel seemed clearly, at the least, anti-clerical (note a page where the protagonist seems to fart in the direction of a priest), using the term for a prayer book, sets up the book as a spiritual book of a less religious nature, a book grounded in the appreciation of this life rather than the next. 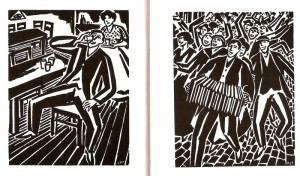 Note how the figure is walking, head held high, a posture he takes frequently in this book.

The narrative is not all joy, as life goes, the protagonist falls in love and is rejected, then seems to have his money stolen while with a prostitute he had picked up. In an odd sequence, my reading is that he rescues a young girl from a man who is beating her. We see her as a child in two or three pages, then she seems to be grown up and, a page later, is standing naked in front of him (there appears to be a canvas in the background, so it is not clear if she is modeling for him or if it is a sexual encounter (though even in the former case we might assume the latter). Then the woman dies three pages later, leaving the man grief stricken. The ambiguity of this sequence (is the girl not as young as she appears at first? has a lot of time passed in between the pages?) is part and parcel with these silent narratives. 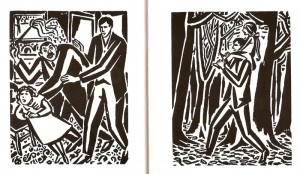 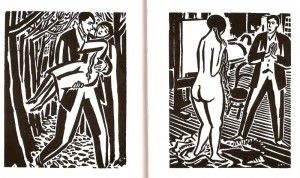 While there are some points in Passionate Journey where Masereel builds a scene out of multiple image pages, in most cases, the narrative is built of images that take place in separate places at separate times. Masereel ties it all together with his hatless protagonist who appears in every scene. Through that character we can see each image as taking place in a succeeding moment of time.

These visual leaps in time are something that separates Masereel’s books from most comics, particular the comics contemporary to his work. A lot of the early comic strip are very focused on a shorter and closer sequencing of time, think of Little Nemo’s transformations or the early gag strips. Even later comic strips tend to pay a closer attention and give more direct pointers to the sequencing of time and place in a narrative. Masereel’s work is, in this respect, closer in alignment to all the varieties of comics avant la lettre like Hogarth’s “A Rake’s Progress.”

What we end up with, throughout this book, is something more akin to a filmic montage, than to most comics. Masereel is unafraid to leave ambiguity in his narrative, an element that most comics seem unwilling to do, favoring the “clear” narrative that doesn’t require too much interpretation on the part of the reader.