I’m not saying anything new when I note that the rise of romance comics in the form of (mostly shoujo) manga is not the first time that genre has been extremely popular in comics. While I’m not aware that Marvel produces a single title now that isn’t a superhero book, at one time they put out multiple romance comics with titles like Love Romances and Our Love Story. Romance comics were popular and a number of well regarded Marvel artists drew them.

Marvel Romance collects an assortment of stories from Marvel’s romance titles of the sixties and seventies–after the heyday of comic book romances (mostly between WWII and the beginning the of the Comics Code). The first half of the book consists of stories from the early half of the ’60s, primarily from the series Love Romances. Jack Kirby, Dick Giordano, and Gene Colan all make appearances as the pencilers, with a few stories going uncredited. The majority of the stories are uncredited for writing, except for one by Stan Lee–not that one could really tell the difference as they are all in the classic Marvel style. The stories are uniformly in the first person confessional mode, last about 5-7 pages, and are decidedly uninteresting. The plots all hinge on the some kind of misunderstanding or misapprehension with the female protagonist invariably getting her man in the end with a closing kiss (or at least the promise of one to come). Lessons are learned, usually that a woman should stick to her dreams and she’ll get her man and be a happy wife.

Visually these stories are conventional and banal: the six or nine panel grid, lots of narration (always in a yellow box for some reason), and semi-realist artwork that was the norm at the time. Even Kirby’s stories lack the visual punch of his more famous works.

The middle of the book has an issue of Patsy Walker by Stan Lee and Sol Brodsky, mostly of interest because it uses reader designed wardrobes. At numerous points during the story little narration boxes tell us the name and location of the reader who designed a particular outfit. Nothing like a little reader participation. Patsy Walker apparently has had a long career at Marvel (sometime after her own series she became a superhero!?), but this story is nothing but an extended case of misunderstanding that drags on far too long.

The second half of the book features ten stories from 1969 to 1972, mostly from the series My Love. Here we find stories drawn by John Buscema, Gene Colan, Jim Starlin, John Romita, and, the highlight of the book, Jim Steranko. From Patsy Walker in 1964 to “I Do My Own Thing” in 1969, the five year passage of time is immediately obvious not just in the art but also in the story. Here we see the first story that doesn’t end happily with a kiss. But, more importantly, the page layouts, compositions, and narrative breakdowns have changed dramatically. Panels are varied more, often overlapping or blending together in a way that is reminiscent of shoujo manga.

“My Heart Broke in Hollywood” by Stan Lee and Jim Steranko is the best reason to get this book (or at least spend some time browsing in it), and it’s not because Stan Lee wrote a great story. Steranko’s artwork here is a revelation in itself. I’ve read about his work from the period, but this is the first time I’ve seen it. I’m extremely impressed. His unvariegated line flows around the page with curves, curls, and flourishes without ever changing weight even when delineating backgrounds or patterns in clothes. He uses spot blacks often in the form of silhouettes that add visual emphasis to the pages. Many of the forms are stripped down to a minimalist outline with a few lines to outline the shadowed areas.

(Note the silhouettes, the pastels, and the liberal use of white. Click to see larger.)

A number of single images are broken up into panels to emphasis timing, as well as zoom sequences that one never sees in the earlier stories. The compositions are dynamic and the characters poses are very dramatic, almost melodramatic, fitting with the story’s characters all being actors. He also makes use of some ’60s psychedelic flourishes like one panel where he uses a kind of striped rainbow effect to emphasis an important moment.

(Note the rainbow effect and the patterning. Click to see larger.)

The colors also shout 60s, with an amazing palette of bright greens, oranges, pinks, and purples that are nicely tempered by the a generous use of white.

The only other story of real interest is “As Time Goes By” by Gary Friedrich, Gene Colan, and Dick Giordano. Even the writing is less conventional here, as we find a young woman in love with the dead Humphrey Bogart after she sees a Bogart film festival. Will her boyfriend understand? You can’t beat her room with its Bogie posters and framed pictures, or the head of Bogie that appears in her fantasies. Colan’s more realistic artwork works great here to make Bogie look like Bogie and put the other characters and settings in a similarly real frame. Giordano’s inking makes all the difference, too, particularly when one sees the next story where Colan is inked by Bill Everett. Giordano uses a lot of hatching and spot blacks to give the art a more photorealist look that strengthens Colan’s art. 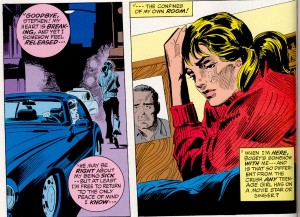 The whole book has had the color “reconstructed” from the original four color process to flat colors. The cover of the book as well as some of the front matter show images from the stories with their original coloring, the ben day dots being visible. I found these original images much more attractive than the recolored versions. The bright colors lose something when they are done with modern printing methods. An element of the original has been lost.

In the end, the selection method for this book is a mystery. Is it a greatest Marvel romance stories? That seems the most obvious answer, yet if these are best… I’d hate to see what the average or worst are. These stories are formulaic storytelling at its… best? The small variations on a standard plot structure might be worth studying, but as a reading experience they become dully repetitive. Still, there are a few bright lights in this book, and, if nothing else, check out that Steranko story. It’s almost worth the price of the book.