I started reading Louis Riel back in 1999 when Chester Brown aborted his Underwater project and started publishing this comic in pamphlets. With one or two issues coming a year, I never went back to reread each time and, as a result, not really following the story, I stopped buying it before it got to the end. I finally bought the collected edition a few months ago and then it sat on my shelf. Last week, I started reading a collection of Harold Gray’s Little Orphan Annie strips (more on that, as I’m still reading it). It is a large hardcover volume that’s not good train reading, so for a train ride this week I finally picked Louis Riel off the shelf. It occurred to me that Brown’s art in the book is quite reminiscent of Gray’s, and there in the introduction Brown states it explicitly. Good timing on my part I guess. 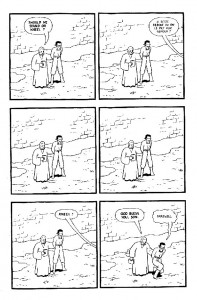 Louis Riel is subtitled “a comic-strip biography.” It is a circumscribed biography that focuses on Riel and his conflict with the Canadian government in regards to the half-Indian(Métis)/ French speaking population of the Red River Settlement, later named Winnipeg. The book covers the years from 1869, when the settlement was sold to the Canadian government, as part of a larger packet owned by the Hudson Bay Company, to 1885, when Riel died. Basically, Riel was a leader and rallying figure for the Metis/French as they struggled to maintain their land and gain representation in the government.

Although it’s subtitled a “biography,” I don’t feel I learned a whole about Riel as a person. We see him acting and talking, but there is little depth. As the story goes on he gains some idiosyncratic religious views and perhaps goes mad. Considering Brown’s expressed interest (in interviews) in Riel’s religious views and psychology, I don’t think Brown expanded on this part of Riel’s life enough. One of the failings of the narrative is that I never got a real sense of why Riel was such a rallying figure. His charisma (which surely he must have had to instill such respect) is never made clear. In the latter part of the book his religious views had a detrimental effect on the Métis’ struggle, yet the men listened to him. 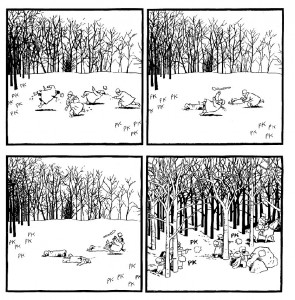 It is easy, though, to see where he was pressed for space to include such a complicated story. The political/historical side of the story is well explained and clearly told, yet the biographical/ personal aspects of Riel’s life are glossed over. As a historical narrative about the struggle for political representation and autonomy the story is both educational and entertaining. To this reader, it seems that Brown was really more interested in the political aspect of the story than the life of Riel himself.

If you’ve seen Harold Gray’s work, Brown’s style will look familiar. Characters have empty oval eyes, pronounced noses, large bodies, almost nonexistant necks, simplified clothes (a wrinkle at the elbow, a wrinkle at the knee). Backgrounds are iconic, simply drawn but detailed enough that everything is identifiable. Brown uses hatching for shading, though not excessively or in great variation. The simple, almost invariable linework and the fine hatching allow Brown to fit a lot into a panel when he needs to. The artwork is amazing. It’s a testament to the fine beauty of Brown’s drawing that I want to see them at a larger size. As they are now, I always felt like I had to look close to really see the art.

Brown sticks strictly to a six panel page. This gives the book a steady rhythm. No single panel is more important than the one before or after it. Though, like all history, it is the events that are put in and those that are left out that determine importance and weight. No event carries more visual weight than any other except in a very few occasions where Brown radically changes what is inside the panel. In one instance, an all white panel is used during the moment of a firing squad. Conversely, two all black panels are used during Riel’s trial (when the jury deliberates). At one revelatory point for the Canadian Prime Minister, Brown strips down the art even more than usual, eschewing all hatching and line weight to create a stark, bright drawing of the man sitting in his chair. 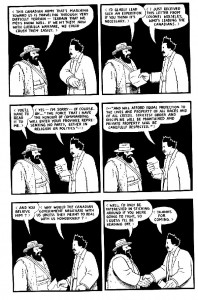 The moment to moment panel transitions are one of the most interesting aspects to me. Brown frequently repeats panels or only slightly changes the drawing from one panel to the next. This is an exaggeration of Gray’s style–he would often change the point of view of distance from the characters. Brown will often, for example, have two characters talking, showing them in profile, always heads and torsoes (never just “talking heads”). Over the course of the sequence, the point of view and distance remains the same, and the characters will only alter in slight ways: the opening of a mouth, the movement of a hand, the turning of a head. Even in sequences with more characters, there will be only slight movement (a background character turns to look at a different speaker).

This slight variation in time and movement is also put to great use in the “action” scenes, such as this one during a battle between the Métis and the Mounties.

The lack of any variation in the panels helps to add weight to moments that otherwise would pass by in the unrelenting flow of the panels. The repeated panel serves some of the same function as a large panel would in a variably layed out comic. The repetition slows down time during the execution of the Englishman, Scott.

The compositions often have a distance to them. Everything is viewed from outside, which makes this story much less personal than Brown’s previous works and more reportage, not unexpected in a historical comic. He makes much use of an aerial view of characters in a landscape, particularly during the battle scenes or to show travel. The scenes that take place in the snow have a beautiful white simplicity to them with a minimal of elements in the panel (a character on horseback, a few sticktrees, a thin horizon line). The compositions, particularly when showing conversation or small scale interaction, have a theatre set-piece look to them: profiled characters directly in front of an abstract background or a room with minimal furnishing (a table or a bed).

As of this writing, Louis Riel, regardless of my feelings on its biographical aspect, is Chester Brown’s best work. If anyone out there was reluctant to pick this up because of its non-fictive nature, I highly recommend you give it a try. This is an entertaining, engrossing, and beautiful comic. I’m ever more excited to find out what Brown will be doing next.