This post originally appeared at The Panelists on February 28, 2011.

I started my post on Mark Laliberte’s Brickbrickbrick by noting the publication’s context as a book labeled “poetry” from a literary press. His most recent publication Grey Supreme 1 is published in a rather different context. That “1” alone tells us something. This is the first of a projected series of annual issues of Grey Supreme. The publication is a slightly larger than normal 32 page pamphlet from Koyama Press. Koyama is not exclusively a comics publisher, but they have, up to now, published more comics than other books.

Does this context help make the reading experience of Grey Supreme more of a comics-esque one than Brickbrickbrick? For most readers, I think it would. This looks and feels like a comic (a nicely printed on thick paper comic). But inside, we find something that is a bit alien as a comic (well, for most readers, I would think). The comics in Grey Surpreme have more in common with abstract comics than conventional narrative comics, despite the representational imagery used by Laliberte. 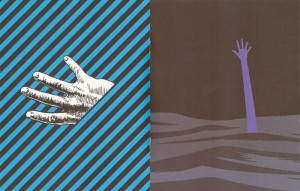 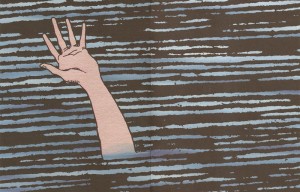 Grey Supreme 1 contains two works, which are independent but also offer some thematic connections. The majority of the publication contains “Swallow,” a 19 page series of images showing a single arm reaching out of water. The image is an oft-seen shortcut for a person drowning, a last reach for air as he/she goes down.

The images in “Swallow” are at their heart, two-fold: an arm/hand and the water/ocean. Within each image the styles of these two part are varied, as they are also varied from image to image. Quite like Brickbrickbrick, this appears to be in some way a manipulation or redrawing of appropriated imagery, collaged together. Some of the images have that craggy edge to their lines that speaks to an enlarging of ink of paper. Some of the images are digitally precise; some look like old engravings; some are flat colors; some are digital gradients; some are abstracted patterning; some are traditionally representational rendering. One clearly shows the texture of paper beneath and pale flesh of the arm.

The collage-like stylistic contrast within the same image creates a sense of disconnect between arm and water. The arm and the water are not unified, the arm is like an alien object stuck through the water. The two elements are in conflict visually and narratively. Visually, the arm is winning, as it becomes the foreground, the focal object for each image. In contrast, narratively, the water wins the conflict. The arms struggle to reach out, and, in the last image, there is no arm at all, just the water, with three inverted arcs signifying waves but also looking like an abstracted smiling face. This slightly creepy final image, reading like the final victory of the water, is followed by a poem titled “Swallow” or maybe “Sleepy, Hollow” (“Swallow” is printed in white at the top of the page, while “Sleepy, Hollow” is printed in all caps at the start of the text). The short poem, all short words and rolling rhythm, plays as a fitting denouement to the sequence of images. There is the potential for a poem placed at the tail end of an image sequence to feel tacked on and unnecessary, but Laliberte succeeds at this gambit. The poem faces the armless ocean image and is printed in text the same color as the night sky about the ocean, creating a visual unity to accompany the thematic one.

One other aspect of “Swallow” that adds to its effect is the rhythm of the images. The sequence is made of two single page images followed by a double-page image followed by two single page images, etc. Like the rhythm of the poem, a perhaps another indicator of Laliberte’s poetic background, this adds a rolling water motion to the sequence, a steady pace that becomes familiar and comforting.

The second piece in “Grey Supreme” is a seven image photographic sequence showing a view outside Laliberte’s window titled “Double Rainbow.” A large pit in the earth foregrounds graffitied buildings, construction machinery, and a low skyline. From the expansive sky over the scene, a rainbow arcs just off-center. The image is repeated seven times, each one manipulated to be tinted, in sequence, each of the seven colors of the rainbow (thus the title). 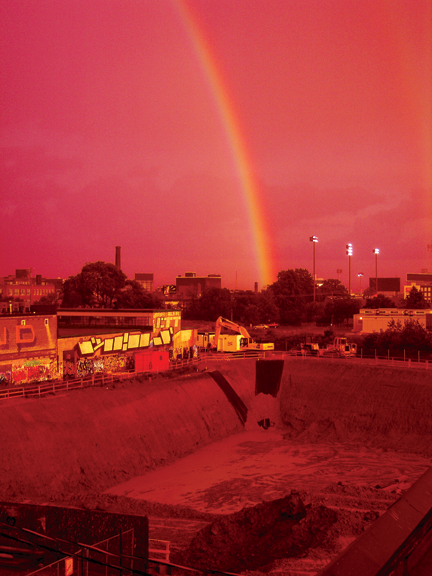 By itself, “Double Rainbow” is a quick recognition of the amusing concept followed by a sense of the thinness of it all. But, in conjunction with “Swallow”, the resonance allows for a greater appreciation. If “Swallow” is a struggle between man and nature, where nature is victorious and fearsome, “Double Rainbow” shows us a more complicated case where man seems to be winning over nature physically, while nature takes an aesthetic lead. In “Swallow”, water is an overwhelming force, in “Double Rainbow”, water is the purveyor of beauty in a single drop.

“Double Rainbow” also ends with a page of text, though this text seems more like a title page/addendum than the text in Swallow. The page lists the location of the photograph and a brief explanation of a rainbow. It’s not clear that’s it meant to be part of the sequence, and it doesn’t read as such.

I mentioned above that “Swallow” has more relation to abstract comics than conventional narrative comics, but I don’t think it is completely divorced from narrative work. Allow me a tentative attempt at explanation… Abstract comics foreground the visual elements of comics as visuals. From panel to panel, or page to page, we read the images qua images, not as a sign of some narrative/diegetic meaning. A more convention narrative comic foregrounds the meaning behind the images. This isn’t to say the images aren’t appreciated or read for their visual qualities, only that that is not the primary motivation.

“Swallow” exists somewhere between these two points. By repeating the same content in a variety of styles, Laliberte pretty much forces the reader to read these images as more than just the signifiers of arm/water. A focus is placed on the way the arm/water are represented, on the formal qualities of the line/color/texture/composition as well as the pacing of the images through the pages. Yet, behind these repeated images there is a narrative, however slight, that can be constructed, read into the repetition. What really makes it a narrative, to me, is that last image, the one without the arm. That shows change on a different level than the rest of the images. They all change on a purely stylistic visual level, but that last image creates a narrative change, and through it retrospectively creates the whole sequence into a time sequence. It is not just a series of arms in water, it is an arm over time, struggling in the water, then… failing.

At least that’s how I read it.