A long time ago, I used to go to this bookstore in a nearby town that had an extensive magazine collection, bigger than I’d ever seen (which may not say much as this was in the suburbs and before places like Borders were ubiquitous). Browsing through them I found a magazine (alas, I don’t recall the name, it may have been Deadline) from the UK that was mostly a music magazine but it had this comic in it that was immediately striking with high contrast art and a slightly mysterious story about some teenagers. It was called Exit and written and drawn by one Nabiel Kanan. I bought as many issues of the magazine as I could find over the next few months and ripped out the pages containing Exit. Only sometime later (1995-1997) did Caliber Comics release a pamphlet series of Exit Volume 2 (6 issues) and a collected book of volume 1 (1996) in the US. Here I will write about the collected volume one, subtitled “Under the Sun.”

The story follows a set of British teenagers suspended in time between finishing school and waiting for their “A level” test results which will, in some ways, decide their futures. Narratively, it jumps between the present and 18 months into the past. In the present we follow Karl, Cig, Louise, and friends as they spend their summer. Louise has been getting postcards sent from the previous resident of her house, Roger, a friend of Cig’s and Karl’s who ran away 18 months ago to fly to America and meet a former exchange student he fell in love with. Louise sees Roger one morning outside her house and enlists Karl in her search–reluctant romance follows, naturally. Cig seems less interested in finding Roger and more interested in fixing up a rundown youth hangout, hoping to leverage the support of a local politician as way into a job. Their stories in the present intersperse with Roger’s story in the past, as he makes his way to London and, unable to afford a flight to America, falls in with a group of criminals.

Each of these characters seem torn between leaving and staying in their hometown of Murton. Roger gets away but returns. Louise is set to go to France for vacation but stays longer to be with Karl. Cig wants to get out but feels stuck, a sense of his own worthlessness. Karl goes as far as standing on the highway trying to hitch a ride, but then turns down the ride he is offered. They are all looking ahead, some towards college, some to bigger dreams (Roger’s escape to America).

The story as a whole is an engaging drama that plays out in ten episodic chapters. Some of the subplots have a certain cliche to them, but what Kanan does masterfully is doling out and holding back information. It’s only on rereading that certain images or words take on a new meaning to hint at what happens later or what is going on in a character’s mind. It is mysterious but without an overwhelming sense of what the mystery is. There is no single goal to be reached at the end. Kanan shows a lot of skill for his first long-form published comic. Little details in the beginning return later, showing evidence of much planning, despite the years separating the beginning and ending chapters. Even years after first reading, I’m still surprised by events, and I think it owes a great deal to the way Kanan organizes his narrative, breaking up scenes from one sub-plot into pieces and interfiling them with scenes from another sub-plot. He makes very little use of narrative captions. The reader is suddenly in another time or place, following a different character(s). This adds to the suspense and mystery as well as the narrative tension.

I can’t but think about Exit in relation to film noir. From the high constrast, black heavy art and the various situations the characters find themselves in to the backdrop of an impending war (I assume the Gulf War which coincides with when Kanan started the comic), the noir style and themes are prevalent. That isn’t to say that this is a detective story (though there are mysteries and attempts to solve them) or a crime story (though crime occurs in numerous forms), rather it blends these elements with a teen drama in a unique way.

As with film noir protagonists it is the characters’ dreams and what they do to get them that brings about downfall or at least conflict. Sometimes it only takes one mistake. You may recover, you may not. For the most part, the ending is more positive than the average noir, only one protagonist, the one who seems the least likely, ends up dead.

The war looms over the story, mostly through the character of Roger and his American girlfriend (whose brother is in the air force). The war is fear of the future and fear of the world and dissatisfaction with life. The American girl calls for Roger to comfort her in the face of war, but he is stranded in London, ineffective against something so big. This background acts as a damper on the events of the story, throwing a tiny bit of absurdity onto their individual problems.

But what is immediately arresting in Exit–before even reading the story–is the artwork. Similarly to the way he deals with the information in the story, so does the art both give and withhold. This image from the first page gives a decent overview of the style: lots of blacks, lots of white areas where it looks like the sun has burned out any lines, hatching for tone (most often just parallel lines), and a combination of geometric shapes and fluid lines. 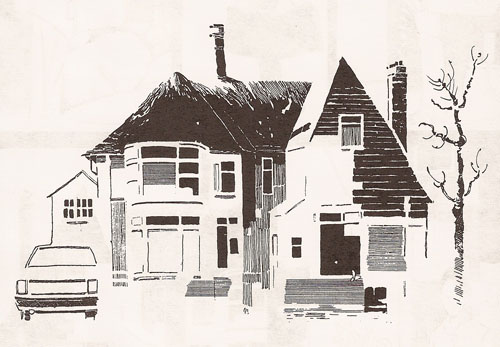 The high contrast is very noir-esque. Black tends to predominate on the page, aided by the use of black margins and gutters. The expansive blacks wipe out detail, leaving shapes. Similarly, detail is whited out like holes in the darkness. The art isn’t always as severe as I make it out to be, but that is the overwhelming feeling. Kanan’s style shifts through the volume (certainly due to the period of time over which it was drawn), sometimes as severe as that, sometimes using a few spare lines. Between the black and white is the hatching that acts at various times to provide depth, texture, tone, and structure to the images.

Kanan is very strong when dealing with panel sequences that show short periods of time and slight movement. For instance this strip from early on in the book:

Combined with the movement of the characters (facial expressions and gestures), take note of the street sign that starts in the mid-ground and recedes into the distant background, simply and clearly showing the movement of the car. These types of sequences are frequent in the book, often used to show the changing expressions of characters in conversation. Kanan gets a lot of information out of the body language of his characters. Speaking before of the withholding of information, much of it comes from the need to pay careful attention to the characters reactions to different topics or scenes. For instance, Cig’s interest in a certain girl is easy to miss until a pivotal moment at the end of the volume, but on rereading, one can pick this up much earlier by more carefully “reading” how he acts while saying certain things.

Early on in the book, the pages are packed tight with panels anywhere from 4 to 14, but leaning more towards the higher number. But in chapters 5 – 9 the pages change. Large black bars cross the top and bottom margins of the page, looking like a letterboxed movie on television and Kanan moves to much more open and horizontal layouts. The images move the read across the pages, almost like a panorama. The pages are often layout out as montages with characters repeated multiple times in a row, often using a single large background. The effect is amazing and as far as I’ve seen unique in comics. Here are two pages from chapter 5:

The background is one single image, but the characters repeat, standing right next to themselves. Kanan also has a lot going on here: the foreground characters (Karl and Louise) and their conversation, the images Karl sees in his binoculars of Roger and the couple in the bushes, as well as the narration. A lot of the pages work in this way. Here’s another one:

The repeated characters seem to move across the background: first the bridge on the left then the wall on the right. In between, we actually see Karl moving as he jumps down from the bridge.

Occasionally he shifts from these dense montage pages to sparse pages with only a single image in a field of black. The contrast works to change the mood, creating, in the case below, isolation and fear, in other cases a strong focus on some object. Any example of Kanan’s skill in working with the form.

These types of pages are in the majority through half the book, only in the final chapter do the pages return to the previous more conventional layouts as the book closes.

Exit left a strong impression on me when I originally read it, and in returning to it after a number of years, I find myself even more impressed, not just with an enjoyment for the story and the way it is organized, or the style in which it is drawn, but also the impressive page layouts. Kanan has since done a few books: Lost Girl (NBM), Birthday Riots (NBM), Drowners (Image), but Exit remains my favorite. Unfortunately Exit is long out of print (I can’t even find it listed on Caliber’s poor website). My copy is the victim of cheap binding and is falling apart worse than any book I’ve owned, almost every page is loose now.

(I broke this comic out to review in response to Chris Mautner’s call for reviews of old/ignored/obscure/underrated comics.)