If you aren’t reading Fanfare/Ponent Mon’s books then you are missing some of the best manga being published in English. Taniguchi’s Walking Man delighted with its quiet meanderings of daily life and realistic images; in Blue Kiriko Nananan tells a low key drama about friendship, growing up, and the passage of time that stands out for its subtlety of storytelling, stark artwork, and harshly composed panels.

One day, Kayako Kirishima, a Japanese high school student, makes the acquaintance of Masami Endo, a classmate who was recently suspended from school. Kayako adulates Masami, and slowly the two girls become very close friends. Their relationship becomes romantic, but it is disturbed by Masami’s past relationship with a man, Kayako’s jealous friend, and the passing of time which changes hopes and dreams into new realities and reimagined dreams.

In other hands this might be a melodramatic story with largely writ emotions, passionate sex, and lessons to be learned. Nananan proves herself a talented comic artist by her subtle telling of the story. The romantic relationship between the girls is never played for shock or titillation. She nevers paints either girl as gay or bi or straight, avoiding any character typing. The two girls love each other; they kiss. It’s never made clear how much Kayako is really interested in boys, and it’s not important. What is important is the way they feel for each other and the way they address these feelings, both successfully and not. Nananan does not spell out all the plot points and emotions with direct illustration or excessive narration, instead she teases it out through the combination of her drawings, compositions, and breakdowns (that is, the way the story is organized into panels).

Nananan’s art style is immediately striking. Sparse is the best word to describe her high contrast, minimally detailed drawings. Her characters are almost all contour line drawings, very little detail lines are to be found within the unvarying outlines. Solid areas of black and the occasional grey ziptone is used to add contrast and tonal impact, usually in the form of hair or clothes. The characters’ faces often appear strange when viewed from the front because of the way she draws noses as just a shadow at the bottom. The characters are stiff, frozen in time and movement. I don’t mean this negatively. It is highly effective in creating a sense of all the moments that are missed inbetween what we see. The backgrounds are minimal, often non-existant. Rooms, buildings, furniture, everything has an architecturally precise look: straight lines, repeated shapes, few curves, and lack of shading or tone. The lack of detail and the minimal number of elements in a panel force the reader to look at what is there, to pay attention to the characters, to the subtlety of their movements, and to the compositions of the panels.

The compositions are unusual and powerful. Nananan crops her characters in strange ways or positions them with their backs turned. Heads are often cropped off bodies or cropped so we only see nose and mouth. Characters are placed at the edges of the panels, often facing that edge, away from the larger portion of the panel. The compositions create a frequent sense of awkwardness. The characters are closed in but trying to escape; they are trying to stay together but are separate, distant, looking away. These compositions enhance the mood of the story and increase the effect of the emotions.

The breakdowns are decompressed and occasionally repetitive. The story lingers on moments with repeated frames. Subtle shifts in facial expression are conveyed with repeated panels. I’d like to point out two examples of skilled and subtle comics storytelling from the book. 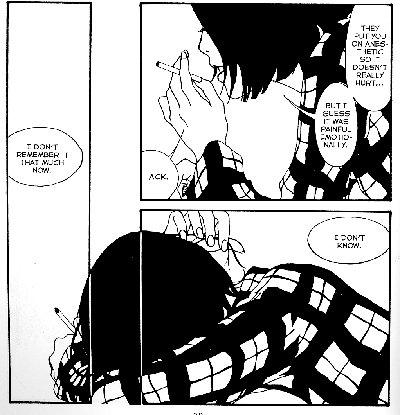 On the bottom two-thirds of page 39 we see Masami lying down in her bed. In the first panel (this manga is in its original right-to-left format, so it is the upper right one) she is raised up on her elbows. As our eye drops down to the next panel, so does Masami drop down to hide her head in her arms. The way her figure in this panel bleeds into the gutter and then the next (tall) panel, creates a sense of time passing, without even needing a second image (that rectangular panel creates the effect). Notice also the ash on the end of the cigarette has grown from beginning to end. 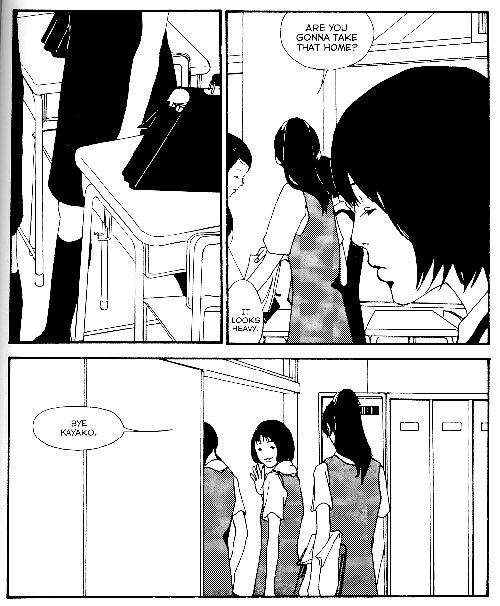 On page 76, Kayako (in the foreground of the first (right) panel) is sitting in a classroom. The three girls in the background are friends of hers. One of them is not talking to her, and thus, the others are mostly ignoring her too. On the previous page they walked into the room to grab their bags. The second panel on this page shows an odd viewpoint of the girls walking past a desk. We see the bottom half of one girl and only a sliver of another. In the third panel we again see the three girls, this time leaving the room as one says “bye” to Kayako. It becomes obvious that the previous panel was Kayako’s viewpoint. She looks down as the girls pass, avoiding contact as much as possible because she is ashamed of what happened between her and her friend.

These are subtle elements to the story to which attention need be paid. It would be easy to breeze past these sparse panels, but by doing so, one would miss so much of Nananan’s work. The character’s faces often appear quite expressionless, but it is in the subtle variations from this expressionlessness that the characters show emotion: happiness, sadness, anger, or doubt.

While the main focus of the story is on the characters, but the book opens with a look at a path leading out to a beach. Behind the girls’ school there is an empty beach that seems to be part of or adjacant to a construction site. Kayako goes to sit and look at the sea. The horizon, the meeting of the sea and sky, becomes a leitmotif representing the possibilities of the future. The story begins at this site, when the whole book is possibility. When Kayako and Masami first talk to each other one-on-one they are out at the beach. When they first kiss, a panel of the sea horizon shares the page. And, in the end, when decisions are made and the possibilities are created anew, the horizon is shown.

The book opens with these words:

“The sky that stretches out above the dark sea. The school uniforms and our desperate awkwardness. If those adornments of our youth help any color it would have been deep blue.”

These words trace their way through the story: the horizon of possibility, the school uniforms and awkardness found in the compositions and cropping, and the metaphorical blueness of the emotions grown from the situations of the characters.Kiriko Nananan has impressed me greatly with this book. Blue is her only full length available in English. Two short stories can be found in Secrets Comics Japan (Viz), but they are clearly much earlier works for her (the art is less refined). I had to order this volume from Canada, as it seems very hard to find in the U.S., but with the publisher’s recently announced distribution deal, it should be available soon.