American Elf is the only work of Kolchalka I’ve really enjoyed over the years. Something about the strip that maintains my interest and attention is lacking from his fictional stories. In the context of these strips even humor that I would find unhumorous or distasteful in the fiction is understandable and enjoyed. What makes American Elf stand out from many diary strips is Kolchalka’s ability to find the exceptional moments in the day, be they funny, sad, sublime, weird, joyous, absurd, or touching.

Comics is often spoken of as an art of subtraction or omission. What is left out in the breakdown of panels is as important as what is put in. American Elf is notable for what it does leave out: almost any reference to the repetitious moments of life, to the everyday. Kolchalka is so good at the exceptional that the sense of repetition, banality, and time of the everyday is lost. While this does make for a diary strip that is probably more interesting to read at a one strip at a time pace, as an aggregated collection one realizes how little the diary represents life as it is lived. The exceptional moments displayed are shorn of any connecting time; they exist as fragments of a life. Each strip is a punctuated moment that often stands outside any real contextual bearing to the strips that precede or follow it, almost a collage where the disparate parts join to form a whole that appears as a unity. In the case of American Elf the whole that is formed from the fragments is filled with ellipses. While the reader knows Kolchalka, his wife, son, and friends are real people, the image we form of them is mostly built up by filling the many blanks. In a way, we learn so little about these people that the book itself becomes almost fictional through between the strip interpretation and elaboration. And isn’t this at heart what the comic visual style is about, particularly the caricatural style that Kolchalka puts to use in representing himself and the other characters. By finding myself calling them “characters” rather than people, I feel how much the work makes me read it more as fiction than autobiography.

The strips are drawn in a loose, abstracted style, for the most part, though it occasionally delves into realism (life drawing). The art is clear and concise, most notable for the bright color palette which varies from strip to strip. Black is almost never used. Most of the linework is done in varying colors. In this volume he moves away from the duotone strips of the previous volume, replacing them with a less systematic use of multiple colors. Personally, I really like the duotone color scheme, it appeals to me sense of order. Formally, these strips aren’t very inventive, the focus is clearly on the moment, the micro-narrative, rather than the execution. You can breeze through reading these strips finding yourself paying hardly any attention to them as comics, which in the context of a daily recording makes sense. These are closer to sketches than paintings, brief notes rather than novels.

Here’s a strip that is out of the ordinary, but one that really struck me on reading: 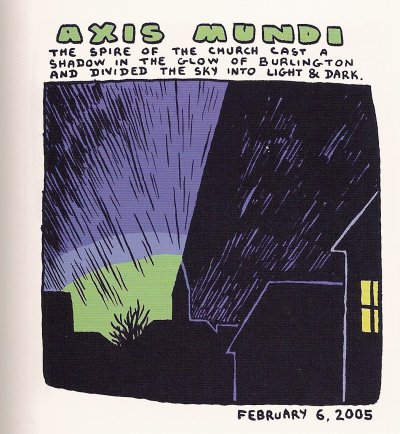 If you haven’t read American Elf, I highly recommend it. One of the best strips of its kind.