Allow me an analogy: Jack Kirby is to American superhero comics as Herge’ is to bande dessinee (European comics)… except Herge’ is also widely known by the general public of his country, Belgium, and was recently voted in the top ten of famous Belgians–not bad for a comics creator. Herge’ is best known for his series The Adventures of Tintin, which have sold hundreds of millions of volumes and been translated into some 40 languages. The series consists of 23 volumes (plus one incomplete volume that was published posthumously) in the European style: large (9″ x 12″) hardcover volumes of 64 color pages. The most easily available English editions are smaller in size (approx. 6″ X 9″) and contain three of the European volumes each (192 pages).

The books tell of Tintin, a “boy reporter” who gets himself involved in all sorts of adventures such as defeating an opium smuggling ring, taking a trip to the moon, or aiding a revolution in a pseudo-Central American country. Oddly, though he is always referred to as a “boy reporter” he never writes a story or publishes anything. He is always accompanied by his dog Snowy, and in later adventures by his friend Captain Haddock, a gruff former sea captain who loves to drink whiskey, and often Professor Calculus, a kindly mad scientist who is desperately hard of hearing (the source of much verbal humor). The adventures’ range includes political tales, science fiction, ghost stories, sea adventures, treasure hunts, and mysteries. There is always a plentiful helping of slapstick and verbal humor and usually at least small elements of the fantastic (in Tintin in Tibet there is a monk who floats in the air during his visions, as well as the mysterious yeti).

I’ll admit I wasn’t sold on the series at first. I read one of the earlier volumes (The Blue Lotus, which I wrote about here) and enjoyed it but didn’t see what all the fuss was about. Since then, reading a few French books of comics criticism, I’ve noticed how large the Tintin series looms in their canon and a few of the things that make it worth a closer look. Now that I’ve read and reread more of the stories, Tintin has grown on me. The more I read the more I appreciate Herge’s skill with comics and the more I enjoy the adventures.

Beauty is to be found in economical expression, often the 17 syllables of a haiku contain greater beauty than the 14 lines of a sonnet. Herge’s style, famously known as the “claire ligne” (clear line), is an amazing example of realistic yet concise comics. The “clear line” refers to an equality of value to the lines used for both character, foreground, and background. Line variation is minimized, and no shading is used, though colors are put to effect in differentiating elements in a scene. The characters are drawn in a cartoony style, with dots for eyes and simple one line noses (from Tintin’s small backwards “c” to Haddock’s large protuberance), but the backgrounds are quite detailed. Herge’ also makes liberal use of the emanata such as stars or squiggles to show emotional states. You can see these elements in the example below (click to see a larger version of it): the cartoony characters, the line equality, the emanata (Snowy’s drunk whirlwind and the stars of his tree collision), though not so much the backgrounds. 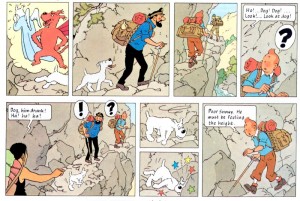 A half page from Tintin in Tibet showing the drunk dog Snowy.

This economy of expression also carries over into the layouts (of the page), compositions (of the panels), and the breakdowns (the way the panels tell the narrative, pacing, etc.). The pages are almost always organized into four strips. The size of the panels varies to accompany the content, which can also be seen in the example (it being a half page, two strips). Note how panel 2 is wider to accompany Snowy and Haddock while the narrow panel next to it both shrinks to fit the closer figures and conveys the feeling of the narrow walkway. The two small panels with Snowy perfectly fit, in their short height, the dog’s smaller stature compared to the humans around him in the preceding and following panels. On a rare occasion (and these are more striking for their rare appearance) Herge’ employs a large panel that uses up half of the page. The regularity of the layouts increases the power of the variations: a tall panel feels tall because it is such a break from the normal sequence, the half-page panels are that much larger because of how expansive they are compared to the norm.

The composition inside the panels follows this same economy of space. When there is the need for a large amount of talking, Herge’ fills the panel with the word balloon and puts the speaker’s head at the bottom of the page. When dialogue is less plentiful he tends to show the characters in full figure. The breakdowns also inherent the economy of the drawing and layouts. Herge’ does not linger over scenes; he shows us what we need to see and then moves on (note the way the second and third panels in the example seem to have the same background). Thankfully for the reader, part of what he has to say is about the backgrounds to all these adventures. Starting with The Blue Lotus (the third story in the first Three-in-One volume) Herge’ did extensive research on the locales (both geographically and culturally) to which his hero travelled.

I’ve only read seven of the adventures, but I’d highly recommend Volume 6 of the Three-in-One books. It contains one of the best (and Herge’s favorite) adventure: Tintin in Tibet (1960). In it, Tintin and Haddock travel to Tibet in search of Tintin’s friend Chang (from The Blue Lotus, decades earlier) who was in a plane crash in the mountains. Tintin believes Chang has survived, contrary to the reports of the rescue team, and he braves the harsh snowy mountains to find his friend. The mountainous landscapes are amazing. There are a few great comic scenes involving a drunk Haddock (who starts hallucinating surreally) and a drunk Snowy (the dog likes whiskey too). While Tintin is the calm cool-headed type in previous adventures, always doing the right thing and keeping the others in check (Haddock is often impetuous), in this adventure he is feverishly driven to find his friend, spurred on because of a dream he considers prophetic. Against the known dangers of treacherous mountains and freezing cold and the unknown dangers of the yeti he continues forward, unrelenting. It is both larger and smaller than the other adventures: larger in emotional scope and characterization; smaller in the cast of characters, antagonists, and settings. Herge’ is at the peak of his skill. In this same volume you also get The Calculus Affair, a rollicking adventure, and The Red Sea Sharks, an international political sea adventure.

The Adventures of Tintin are probably at odds with most American comics. This type of genre-ranging adventure story that is also humorous does not have much of an equal here, where superheroes, autobiography, or minimalism (in the Raymond Carver-esque sense, not visually) are most prominent. I rarely see them in comic stores, but for some reason they are always on the shelves of Barnes & Noble. Give Tintin a try, resist the urge to read all those little panels at a breakneck adventure-ish speed, and take your time enjoying a European master’s skill. I don’t think you’ll be disappointed.