Over at The Hooded Utilitarian, I have a post as part of their “anniversary of hate” about “the worst comics you’ve read” (or something like that). I wrote about the first comic I ever read, Dragonlance #3 (DC):

Here is the whole article, for posterity...

I came to comics by way of role-playing games, Dungeons & Dragons, specifically. RPGs are how I ended up going to book stores (to get game books and then to get fantasy novels), and that’s where, one winter day, at the Waldenbooks in the mall, I came upon the comic book spinner rack in the corner of the magazine section (maybe I was looking for the latest Dragon magazine?). It must have been shortly before my 13th birthday. I don’t recall having any interest in comics previously, other than occasionally reading the Sunday funnies (I always wanted to understand Prince Valiant, but couldn’t), but I must have looked at that rack, because there I found this comic: 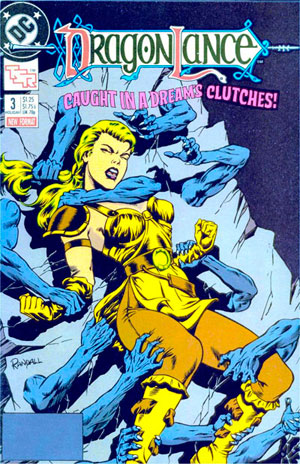 For those not sufficiently nerdy enough, Dragonlance is a game world for D&D that started as a series of game books (modules) and quickly spun out to novels. I’d read the novels (the first books I remember buying on my own in a bookstore, they were kind of like Lord of the Rings but with female characters) and loved them, and here was what appeared to be more of the story. That classic fan desire to increase my involvement with the narrative world took over; I convinced my parents to buy me a comic book. If only they knew where that would lead.

DC had some sort of licensing deal at that time with TSR, the company that owned D&D, because there were a few of these titles they had started publishing very late in in 1988 and which all disappeared by fall of 1991. I assume they were designed for the RPG/comics crossover audience and probably as a way to get one interested in the other. It worked on me, though not really to DC’s advantage, as the the next comic series I started buying was Marvel’s Uncanny X-men (my first issue was drawn by Rob Liefeld… see how great my taste was back then).

So what we have he is a work-for-hire, cross-media, cross-promotion between two corporations that expanded on a franchise… a comic so low on the totem pole that there isn’t a Wikipedia page for it. Even the “Dragonlance” grouping of pages (which are fairly involved, it turns out) don’t mention the comic at all.

So what’s in the comic? It’s basically a 22 page dream sequence (the cover gives this away before the actual story does) with a 2 page epilogue that ends on a “surprise” reveal. The last page of the dream has what appears to be a Little Nemo reference, but what precedes it does not even approach that level of dream-like narrative. Instead of the symbolic surrealism that often infuses narrative dream sequences, this dream reads more like a classic D&D adventure: monsters appearing here and there as the hero wanders about a stone castle. If this story is a little more personal for the characters/protagonists, it’s only to bring in the most clichéd of “background” so that both of them have issues with her/his family. Oh, and don’t forget the repressed attraction between the lead female and lead male, who just can’t be together for some reason or anything (not explicated clearly in this issue, maybe because the male is some kind of priest and the woman is a friendlier (and more clothed) Red Sonja).

The art is not horrible, it’s perfectly adequate 1980s mainstream comic book art, more realist than the work that was about to hit really big at Marvel (Lee, Liefeld, etc.), but lacking any real expressivity. It’s hindered a bit by a unnecessarily bright color palette (perhaps a result of this being part of DC’s “New Format” which was printed offset rather than four color process). The page layouts seem to be trying a little too hard to be “different” without narrative or compositional reason for it.

Even in regards to cheesecake, violence, and action, factors in genre fantasy that might appeal to, say, a teenage boy, it fails to reach a level that makes it interesting. If it succeeds at anything, it succeeds in carrying the brand, drawing in eyes (and money) from a pre-existing customer, who thinks that more of the story will somehow improve on that first exposure to a mostly closed narrative (one can read the original series of Dragonlance modules/novels as a closed series that was popular enough to not stay closed for long, though I’m not sure if that is, historically speaking, the original plan). It worked on me (damn you, DC, if I owned any books you had published I’d throw them out), I think I read this series until they cancelled it (which wasn’t very long).

Are there worse comics out there? Yes. There are comics that have worse drawing, crappier writing, stupider concepts, but this was my first comic and somehow that makes it worse to me. To me this comic is a symbol for all the nostalgia that so engrosses the comics world. Looking back is vital in growing an art form, but at some point that backwards look becomes so distorted as to not resemble what was really there (on my mind since the RNC just wrapped up as I write this). So, it seemed appropriate to draw some attention to the fact that a 13 year old boy doesn’t have good taste.